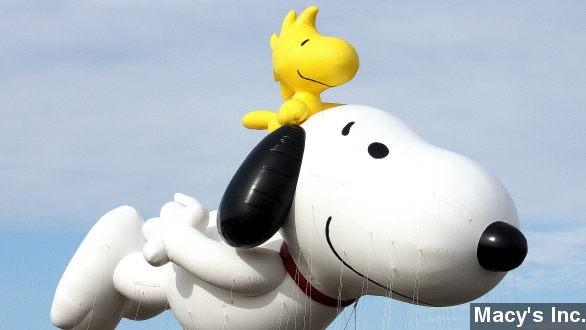 Macy's officials say they will work closely with the New York Police Department and decide if the balloons will hit the skies Thanksgiving morning.

Macy's Thanksgiving Day Parade may have to go ahead without the iconic inflatable Spongebobs, Snoopys, Dora The Explorers and more thanks to high winds in New York City.

On Monday, New York and the surrounding New England area got hit by a winter weather system that's already swept from coast to coast. (Via The Weather Channel)

"Sustained winds of 15-22 miles an hour are forecast in New York City on Thursday. If they go any higher, the balloons will be grounded. A city rule bans the balloons if winds peak higher than 23 miles an hour." (Via Al Jazeera)

1971 is the only year in the parade's 87-year history that bad, rainy weather grounded the balloons. (Via CBS)

But city officials have been cautious about high winds ever since the 1997 parade, when the Cat in the Hat balloon hit a pole, seriously injuring a bystander. (Via WKMG)

If the 16 large balloons do get grounded, other parade festivities like the floats and performances will still go on. The parade also features about 30 smaller balloons that would be able to fly in high wind conditions.

This year's parade would feature new balloon characters including Finn and Jake from "Adventure Time" and Toothless from "How To Train Your Dragon." The Snoopy and Spongebob balloons have also been redesigned. (Via Macy's Inc)

Macy's officials say they will work closely with the New York Police Department and make a final decision on if the balloons will hit the skies Thanksgiving morning.