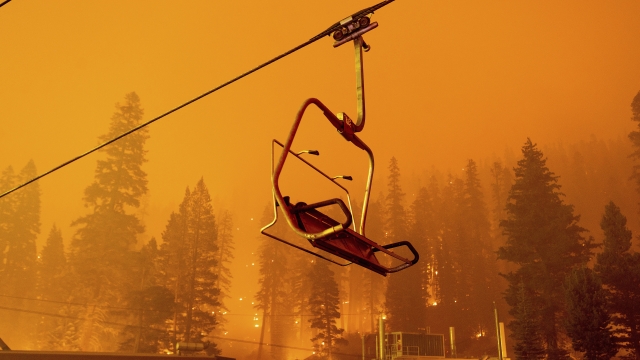 The Caldor Fire is one of more than 40,000 fires since the start of this year and more than 98% of land in the West is experiencing drought.

Flames raced across treetops and through drought-stricken vegetation as firefighters scrambled Wednesday to keep a growing California wildfire from reaching a resort city at the southern tip of Lake Tahoe after evacuation orders were expanded to neighboring Nevada.

Thick smoke from the Caldor Fire enveloped the city of South Lake Tahoe, which was all but deserted during a summer week usually bustling with tourists.

The National Weather Service warned that critical weather conditions through Wednesday could include extremely low humidity, dry fuel and gusts up to 30 mph.

“With those winds, as it ran through the forest it created what’s called an active crown fire run, where the fire actually goes from treetop to treetop,” said Stephen Vollmer, a fire behavior analyst for the California Department of Forestry and Fire Protection.

He said embers were being cast up to a mile out in front of the fire, creating new ignition points, including in some parts of the dense forest that haven't burned since 1940 or before. The blaze was three miles outside of South Lake Tahoe by Tuesday afternoon.

A day earlier, roughly 22,000 residents jammed the city’s main artery for hours after they were ordered to leave as the fire advanced.

South Lake Tahoe city officials said only a handful of residents defied Monday's evacuation order but nearly everyone worried Tuesday about what the fire would do next.

Pushed by strong winds, the Caldor Fire crossed two major highways and swept down slopes into the Tahoe Basin, where firefighters working in steep terrain were protecting remote cabins.

Nevada Gov. Steve Sisolak urged residents to be prepared, saying there was no timeline for when evacuations might be ordered. At a news conference in Carson City, he noted that ash was falling on him even though the fire was about 20 miles away.

More than 15,000 firefighters were battling dozens of California blazes, with help from out of state crews. Climate change has made the West much warmer and drier in the past 30 years and will continue to make weather more extreme and wildfires more frequent and destructive, scientists say.

The threat of fire is so widespread that the U.S. Forest Service announced Monday that all national forests in California would be closed until Sept. 17.

The Caldor Fire has scorched nearly 312 square miles since breaking out August 14. It was 18% contained.

More than 600 structures have been destroyed, and at least 33,000 more were threatened.