Student Loan Payments Set To Restart In February For Millions 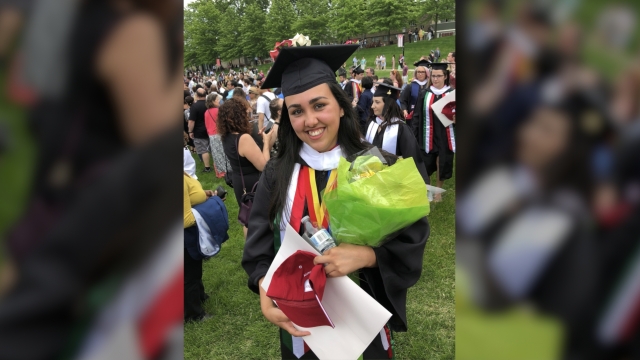 When borrowers resume their payments, they'll still be required to pay the same amount every month as they were before the freeze.

Sabrina Calazans knows exactly how many days are left between now and Feb. 1.

That's when the pause on federal student loans is set to expire. It means Calazans will be on the hook for hundreds of dollars every month — on top of the private student loans she's continued to pay throughout the pandemic.

"I don't know what I'm going to do. It's going to be a struggle," she said. "Not having those payments is really helpful. I know that for a period of time, my mother wasn't working as much as she usually works, and my father as well. And so I was helping out financially at home."

The 2019 graduate did everything she could to offset the cost of college, securing grants and scholarships to her dream school. But it still wasn't enough. Sabrina took out a hefty $43,000 in student loans. A first-generation American and a first-generation college student, she was very much in the dark about how it all worked.

"I was 17," she said. "I didn't know anything, you know, regarding interest rates, or you know, all of these things about student loans. We don't really know that kind of thing. My parents didn't have funding to be able to support me. I didn't have money or wealth accumulated or saved-up college fund, none of that."

Bruce McClary of the National Foundation for Credit Counseling says stories like Calazans' are common. Many people were forced to spend money they would have been saving during the pandemic on other kinds of debt. The NFCC advises borrowers to pay down debt with the highest interest rates first, which typically are not student loans.

"This is especially true for those who have recently graduated because you're going out into the real world, and you're having to finance a lot of major purchases, like your first car," McClary said. "You also have rent or home payments that you have to make, utility bills — all of these other things that are happening around your student loans."

But he says the consequences for missing a payment of a student loan are incredibly severe, so borrowers need to make sure they are still cutting the check. He advises them to contact their servicers as soon as they realize they may have trouble with payment.

"The longer you wait, the worse the situation could get," He said. "Things just aren't going to magically fix themselves."

Servicers are intimately familiar with your student loans and can help you learn about what options are available, including income-driven repayment plans.

"You can request economic hardship to the U.S. Department of Education. You can request a deferment, if you're unemployed, and these types of programs can last up to 36 months," McClary said. "So, they can give you a little bit of an extra reprieve and give you time to get your life back on track."

When borrowers resume their payments, they'll still be required to pay the same amount every month as they were before the freeze. That's why nearly two years later, they're still looking to Washington, and now President Biden, to cancel their debt completely.

"The next package — this is already being discussed — should include student debt relief for at least $10,000 per person to help ease the burden on young people who were already struggling to get by before the coronavirus," the president said.

Calazans said: "We know that he has other campaign promises as well regarding student loan debt, and he has yet to fulfill those promises."

Democratic Sens. Chuck Schumer and Elizabeth Warren and Congresswoman Ayanna Pressley sent a letter to President Biden last week urging the administration to extend the pause on student loans and act to cancel student debt. Proposals are mostly opposed by Republicans in Congress.

While McClary says he doesn't expect broad reaching forgiveness plans in the near future, he believes something smaller may be offered late next year. Because of that, he's advising borrowers only to consider refinancing private loans and not federal ones.

"As attractive as refinancing may seem right now, you really want to think carefully about the consequences of refinancing and what that means in terms of eligibility for federal affordable repayment programs, or even federal student loan forgiveness — should that materialize in the future," McClary said.

For Calazans, making this work in 2022 will be all about budgeting and planning. And even though she's still happy with her decision to go to college, she's hoping to see changes in Washington soon.

"I'm not ashamed to say that because I'm not ashamed that I went to college to get my degree and I didn't have the finances for it. That's OK," Calazans said. "Not many people have thousands of dollars lying around to invest in their education, you know, but I think the system is broken, and it needs to be fixed."