Coulter And Yiannopoulos Are Headed To Berkeley For 'Free Speech Week' 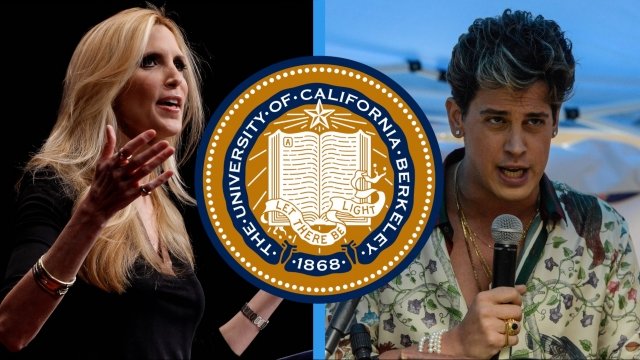 Earlier this year, the university canceled events for the conservative speakers due to safety concerns.

University of California, Berkeley is celebrating "Free Speech Week" with some controversial speakers. Student organizations at the school invited Ann Coulter, Milo Yiannopoulos and Steve Bannon to speak at the events.

As of Thursday, only Yiannopoulos and Coulter have been confirmed by campus spokespeople.

This is an interesting move at UC Berkeley, especially considering the fact that speaking events from both Yiannopoulos and Coulter were canceled earlier this year because of safety concerns.

Yiannopoulos' event from February was met with violent protests — which injured six people and caused $100,000 worth of damages to the school. Months later, Berkeley canceled a speaking event by Coulter to prevent another backlash.

In regard to Berkeley's latest invitation, Yiannopoulos wrote on Facebook: "What a difference six months make! Let's hope Berkeley sticks to this commitment to free expression."

Whether the university actually does may not matter. Back in April, Yiannopoulos vowed he would host "Milo's Free Speech Week" regardless of a formal invitation.

The rally was declared "officially over" after just 90 minutes, but the counterprotest continued into the day.

So, why is the school taking another chance to officially host the controversial speakers?

University Chancellor Carol Christ argued Berkeley fights for the right of all political views — even those that conflict with the school's values of "tolerance, inclusion, reason and diversity."

Christ added in her message to the campus, "If you choose to protest, do so peacefully."

Given the violence surrounding rallies and demonstrations of this nature, a Berkeley spokesman did tell the Chronicle of Higher Education the school is still worried about safety.

The Berkeley College Republicans will reportedly have to pay a $15,000 security fee to host Ben Shapiro, current editor of the Daily Wire. This cost was calculated according to campus police criteria.

Meanwhile, other schools are choosing not to take this risk.

After the deadly protests in Charlottesville, speaking events by white nationalist Richard Spencer have been denied by Penn State, Michigan State University, the University of Florida and Texas A&M University.