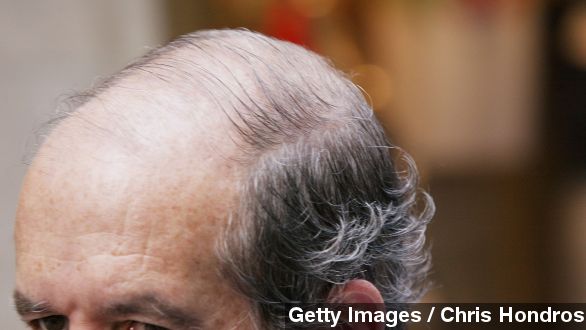 Research published Monday in the Journal of Clinical Oncology might have men checking their hairlines.

The study says men who have a certain pattern of baldness at age 45 are 39 percent more likely to develop aggressive prostate cancer than men who have no baldness.

Now, before you worry about your thinning hair, The Wall Street Journal says, "The hair-loss pattern associated with a higher risk was frontal baldness plus moderate baldness on the vertex, or crown of the head."

And that's it. As for baldness in general, Time reports, "No type of baldness was linked to a higher rate of overall cancer, and male-pattern baldness was not linked to non-aggressive prostate cancer."

The new finding came from the Prostate, Lung, Colorectal and Ovarian Cancer Screening Trial. Researchers asked 39,000 men participating in the study to identify if they had experienced hair loss at 45, and if so, which pattern.

Researchers kept up with the participants, who had an average age of 70 years old at the time of the study. A few years later, about 1,100 of those men had prostate cancer – 600 of those were classified as "aggressive."

The only significant link as it related to baldness was with those men who reported having frontal plus moderate vertex balding.

The co-author of the study told CBS, "It is conceivable that, in the future, male pattern baldness may play a small role in estimating risk of prostate cancer and may contribute to discussions between doctors and patients about prostate cancer screening."

But researchers are hesitant to make baldness patterns part of the screening process, saying the findings need further research.

USA Today points out some potential holes in the study, including that it relied on 70-year-old men to recall their baldness patterns at 45. Instead of worrying about your hair growth, the article suggests controlling what you can, like your waistline.

Ultimately, Bloomberg reports, this link might be due to male androgens, or sex hormones. "High levels of androgens can affect hair follicles, causing thinning and loss of hair. ... Androgens can also cause prostate cancer cells to grow."

Of course, we can't say anything for certain just yet. Only the correlation exists in this study. Oh, and maybe, don't freak out just yet, guys.

This story includes images from Getty Images and Welshsk / CC BY 3.0.