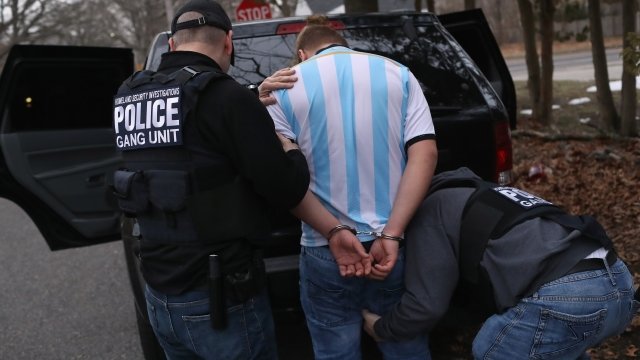 The Immigrant Legal Resource Center — a pro-immigration group —  surveyed attorneys who have represented immigrants accused of having gang ties in 21 states. Half of them reported that gang allegations against their clients — especially young Hispanic ones — are on the rise and often poorly supported.

We should point out that the surveyed attorneys, because of the nature of their work, gain from advocating against the administration's immigration policies.

"So there might be an ICE police report submitted stating as a fact that this young person was a gang member, but not providing the basis for that," explained Laila Hlass, co-author of the report and a law professor at Tulane University.

"Other examples were simply pictures from Facebook, where an undisclosed immigration official had kind of hand-scribbled some notes on this printout pointing to particular pieces of clothing that the young person was wearing and saying it was gang paraphernalia. In one case, it was a blue T-shirt that was actually part of the high school uniform," she added.

A spokesperson for the U.S. Immigration and Customs Enforcement, or ICE, told Newsy that the agency uses clear guidance on how to determine gang membership. The criteria include self-admission and past convictions; wearing tattoos, symbols and clothing associated with a gang; hanging out with known gang members in known gang territories; and having been labeled a gang member by prison or local authorities.

The stakes for accused immigrants couldn't be higher. Once labeled a gang member, they are less likely to receive asylum, permanent residency or other types of relief, and more likely to become the target of a raid and end up in deportation proceedings.

And while obscure gang accusations have occurred long before the current administration, Hlass says Trump's agenda has exacerbated the problem.

"We've heard from the president over and over again rhetoric that, you know, immigrant children are gang members and that the protections that Congress has passed, that these safeguards are in fact loopholes. So it does seem to be part of a larger campaign to not treat children as children," Hlass says.

The White House argues that MS-13, a gang created in Los Angeles in the 1980s by Salvadoran refugees, smuggles members into the U.S. using fake asylum claims. But local law enforcement and activists say the gang actually recruits most of its members inside the U.S., oftentimes taking advantage of vulnerable new arrivals.

With around 60,000 members in Central America and thriving factions in the East Coast and in California, MS-13 is one of the largest gangs in the world. The gang also has 10,000 members in the U.S. across 40 states, according to the White House.

Since May 2017, ICE has arrested 475 suspected gang members. Of those, the agency says, 99 came to the U.S. as unaccompanied minors and 64 had received immigration protections. All of those, ICE claims, have been confirmed as MS-13 gang members.

For Hlass, whether MS-13 benefits from immigration programs is beside the point. Her report finds that not only are accused immigrants left with the burden of proving a negative — the lack of gang membership — but they are also stuck with proving an undefined negative, since there's no law that defines gang membership.

"You don't see that in the criminal justice system. It's very clear that the burden is the government's burden beyond a reasonable doubt. But in the immigration context, how do you prove that you're not something? How do you prove the negatives? The allegations lack transparency, so someone won't know where this allegation is coming from. Is it from a faulty database? Is it a single school officer?" she asked.