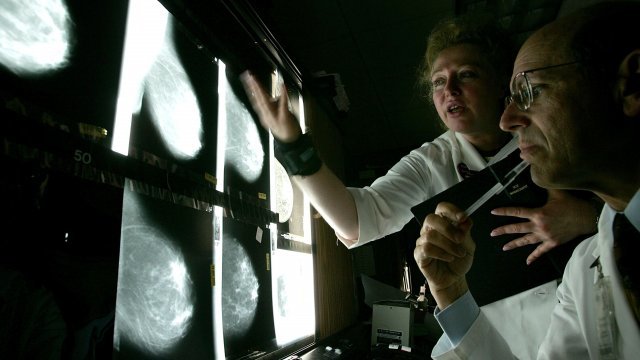 A new study shows a drop in breast cancer deaths over decades, suggesting treatment options and screenings are improving.

A new study found that breast cancer deaths have dropped by almost 40 percent over the past few decades in the United States.

American Cancer Society researchers looked at mortality rates by state and racial and ethnic background between 1989 and 2015. Those rates went down by 39 percent during that time span.

Researchers Have Identified The Genes That Lead To Breast Cancer

An international team has pinpointed 93 genes whose mutations lead to breast cancer.

Still, the findings did highlight some disparities between racial groups. For example, death rates for black women from 2011 to 2015 were 42 percent higher than for white women. Researchers suggest the reason could be a mix of biological and socio-economic factors.

But they're confident the disparity gap is closing in three states that held similar death rates for both black and white women: Massachusetts, Delaware and Connecticut. Study authors recommend that more states try to provide equal health care access when it comes to breast cancer.

It's also important to note that women in the U.S. have a 1 in 8 chance of developing breast cancer. While a decline in mortality rates is a good sign that early diagnosis and treatment access are making a difference, breast cancer is still the most commonly diagnosed cancer in women and the second deadliest.