Study: Testosterone Might Make Men More Likely To Get Flu 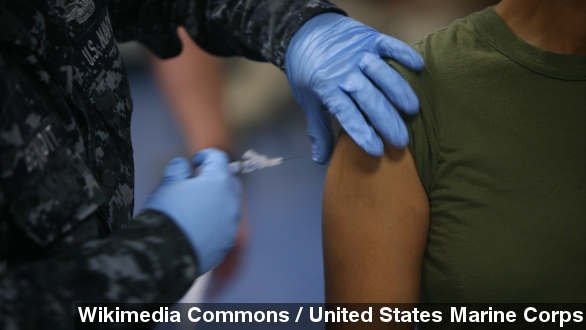 Researchers at Stanford University now say men with higher levels of testosterone produce lower numbers of antibodies in response to the flu vaccine.

Testosterone: it’s the hormone doctors say makes men feel like tough guys, but according to a new study it might make men more vulnerable than women to at least one outside threat.

Researchers at Stanford University now say men with higher levels of testosterone produce lower numbers of antibodies in response to the flu vaccine and tend to suffer more when they have the flu. (Via Proceedings of the National Academy of Sciences)

The study looked at 90 men and women. After each was given the flu shot their blood was tested for antibodies to the flu. Men with higher levels of testosterone tended to perform worse across the board. (Via WSB-TV)

Quoted by HealthDay, Lead Investigator David Furman said, "We found a set of genes in men that when activated caused a poor response to the vaccine, but were not involved in female response. Some of these genes are regulated by testosterone."

To further support their findings the researchers also found that men with low testosterone had similar antibody responses to women. (Via The Doctors)

But before women start gloating too much, you should know the researchers think the findings are a bit of a double-edged sword.

As a writer for Discover notes, “The good news for women is that this ‘show no mercy’ response means they are less prone to bacterial, viral, fungal and other types of infection than the dudes are. The flip side, however, is that women’s immune systems are more likely to overreact.”

And when they overreact that can lead to autoimmune disorders like lupus and rheumatoid arthritis — disorders where a body’s immune system attacks healthy tissue. (Via WebMD)

So why would immune response skew more to one sex than the other? According to the study it could be an evolutionary advantage.

Quoted by HealthLine, the researchers write, “Because males of many species are more likely to experience trauma than females, this positive effect of testosterone may also help to balance out the consequences of reduced immunity to infection.”

Researchers urge that their findings aren’t entirely clear and that more research needs to be done but say the findings could lead to changes in vaccination — like the possibility of higher doses for men.