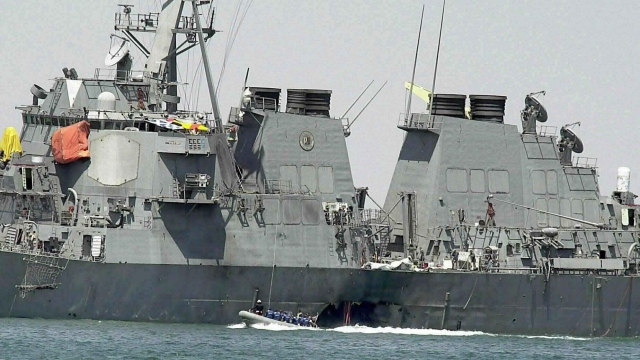 Sudan denies it played a role in the 2000 bombing of the USS Cole in Yemen. But families of the dead say it provided support for the Al-Qaeda attack.

The government of Sudan says it will pay $30 million to the families of 17 sailors killed in the bombing of the USS Cole nearly 20 years ago. But it "explicitly denies" participating in the attack.

Al-Qaeda claimed responsibility for the October 2000 attack on the Navy warship. A small boat pulled beside the USS Cole and detonated explosives as the Cole was refueling in Yemen. The blast also wounded 39 sailors.

The suspected key planner of the attack, Abd al Rahim al-Nashiri, was captured in 2002 and has been held at Guantanamo Bay since 2006.

In 2012, a U.S. District Court ordered Sudan to pay $315 million to wounded sailors and family members of the deceased. But the Supreme Court set that aside, ruling that Sudan's government wasn't given proper notice of the Cole victims' lawsuit.

Sudan is under interim leadership after its longtime president, Omar al-Bashir, was toppled in a military coup. While admitting no involvement in the Cole attack, the new government says it hopes paying the settlement will lead to Sudan's removal from the U.S. list of state sponsors of terrorism.