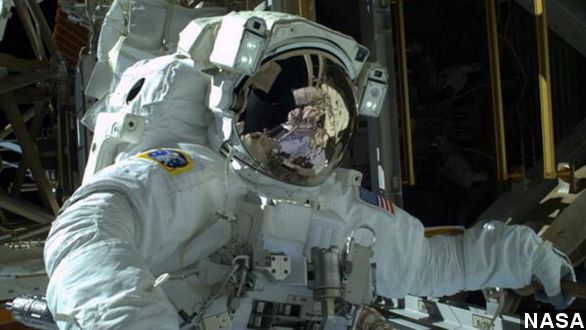 A spacewalk to repair part of the International Space Station has been delayed to Monday to cope with a space suit malfunction.

NASA's repair job on the International Space Station has been going swimmingly so far — maybe too much so. The space agency pushed its next spacewalk back one day after one of the astronauts found water in his suit.

During a spacewalk Saturday, NASA astronauts managed to disconnect a faulty ammonia pump that fueled the station's cooling system. They even managed to do a bit of extra work to get ready for the installation of a new pump.

But during the operation, astronaut Rick Mastracchio's space suit started to malfunction. After he got back into the airlock, the crew found small amount of water had somehow collected in his suit's cooling system. (Via NBC)

The discovery sparked chilling memories of a near-disaster outside the ISS.

On a spacewalk six months ago, European astronaut Luca Parmitano's helmet started flooding, covering his eye and nose with water. Luckily, Parmitano managed to blindly navigate back to the airlock. (Via European Space Agency)

Scientists still aren't sure what caused Parmitano's helmet to leak water, but the astronauts managed to jury-rig an absorbent helmet pad and an emergency air snorkel to cope with further problems. (Via Universe Today)

NASA says the malfunction with Mastracchio's suit is not related to Parmitano's helmet issue. The crew's next repair mission has been pushed back a day so Mastracchio can be fitted for a backup suit.

The Christmas Eve spacewalk is scheduled to begin at around 7 p.m. Eastern. NASA says the crew might be able to finish the repair job on that mission if everything goes well.