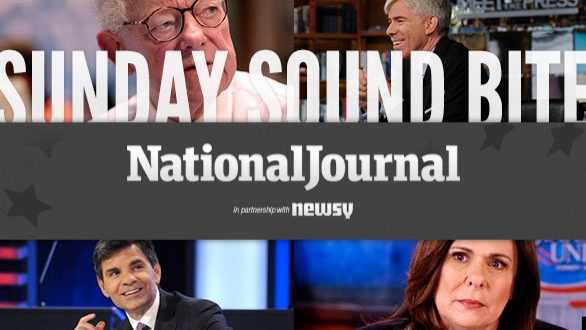 ​On the Sunday shows, a former CIA chief responds to China’s controversial claim.

MICHAEL HAYDEN: “They want to treat the South China Sea the way you and I treat Lake Michigan.”

And a member of the president’s inner circle speaks out on restoring confidence.

DAVID PLOUFFE: “The American people are sitting at home and saying ‘We’re talking about all these issues except what’s important to me.’”

For National Journal, I’m Zach Toombs. Although the White House says the war on terror is coming to a close, Senate Intelligence Chairwoman Dianne Feinstein told this to CNN when asked if we’re safer than we were two years ago.

FEINSTEIN: “I don’t think so. I think terror is up worldwide. The statistics indicate that. … There are more groups than ever, and there is huge malevolence out there.”

In the far east, specifically, tensions have been high over China’s new claim to an air defense zone over disputed islands that Japan also calls its own. Former CIA and NSA director Michael Hayden called China’s move: (Via Al Jazeera)

HAYDEN: “Both dangerous and dumb. … The product of those Chinese steps, which are China missteps: we get to keep marines in Okinawa, we have joint exercises with the Philippines.” (Via Fox News)

And on the domestic front, Healthcare.gov is in better shape than ever, but Republican Senator Bob Corker tells CBS “Face the Nation” it’s too late to fix the reform program’s structural flaws.

CORKER: “The fundamentals of this, to me, were done in a way, a chaotic way similar to the rollout. … I don’t know how you fix a program that was put together in this way, on one side of the aisle.”

While on ABC, former Obama adviser David Plouffe examined why the president’s approval numbers are on the decline — and why he thinks they’ll pick back up. (Via The White House)

PLOUFFE: “It’s been a tough patch. And it’s not just health care, you know, the shutdown affected everybody, confidence in government. … I think the president’s numbers will recover, I think people’s confidence will recover. And we need to push Congress to do immigration, to do smart things for the economy.”