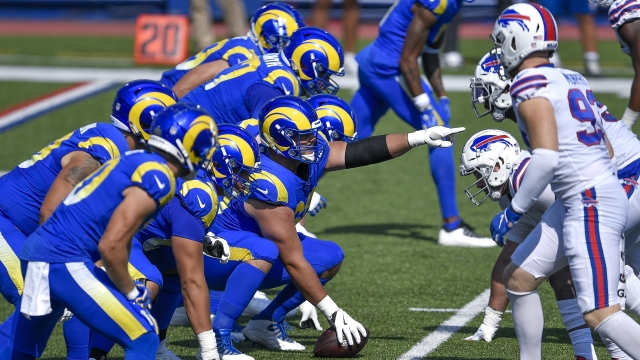 The Los Angeles Rams will kickoff the 2022 NFL Season against the Buffalo Bills Thursday night at 8:20 p.m. ET on NBC.

Matthew Stafford, Aaron Donald and the Los Angeles Rams will raise their Super Bowl banner Thursday night before kicking off the NFL season at home where they became the second straight team to hoist the Vince Lombardi trophy in their own stadium.

“It’s going to be fun,” Rams All-Pro defensive tackle Aaron Donald said. “I’m pretty sure it’s going to be loud. ... We definitely got to go out there and play a good team and try to find a way to win.”

In Buffalo, the focus shifts to why the Bills weren’t aware of the allegations against Araiza when they first selected the San Diego State player.

The Bills are preseason favorites to win the Super Bowl after falling short in the AFC divisional round against the Kansas City Chiefs last January. Josh Allen leads a dynamic offense and the Bills had the league’s stingiest defense in 2021.

“Going to play the defending Super Bowl champs and watching them raise their banner, that’ll be an interesting feeling for sure,” Allen said. “And I’ve talked to a few people who have played and coached in this game before, and just really the unanimous thing that they were talking about was it feels like playoff atmosphere. So, we got to understand that going in, not get too high, not get too low. Understand the flow of the game and just try to put our best foot forward.”