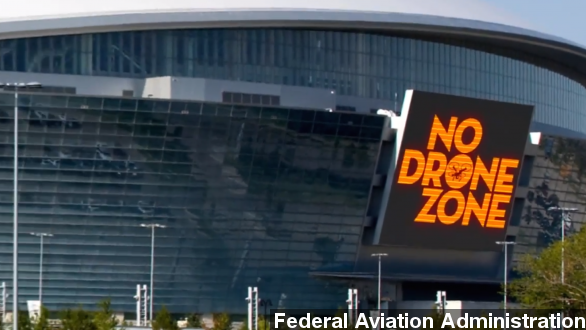 The Federal Aviation Administration listed drones among the aircraft banned from the airspace around University of Phoenix Stadium for the Super Bowl.

Super Bowl XLIX. The big event evokes images of football's gloriously over-the-top culmination, a trophy finally secured by one team and one team only.

And how about a drone flying over the top of the action? Not the image you had in mind? Well, at least one group is worried about personal flying machines, and it's the group that matters.

"Going to the big game? Have fun, cheer on your team and keep it a no-drone zone."

That's a heck of an unexpected turn the FAA took mid-PSA, and it surely has an incredibly limited target audience.

University of Phoenix Stadium in Arizona has a retractable roof, so the NFL could conceivably make this a nonissue for gameplay.

But it appears the FAA is trying to preemptively say these won't be allowed. Drones have caused problems at sporting events before. (Video via The Verge)

During a soccer match late last year, a drone flying a flag with a pro-Albanian message sparked ethnic tensions between Albania and Serbia. (Video via Euronews)

The match had to be stopped as players began fighting while they tried to grab the flag, and those fights continued in and around the stadium when referees blew the match dead.

The FAA's no-drone zone is much more likely about keeping crowds and players safe rather than easing tensions. (Video via KSAZ)

Drones are among several aircraft the FAA announced are banned from stadium airspace during the Super Bowl.