Super-Fast Space Laser Satellites Could Help Save Lives On Earth 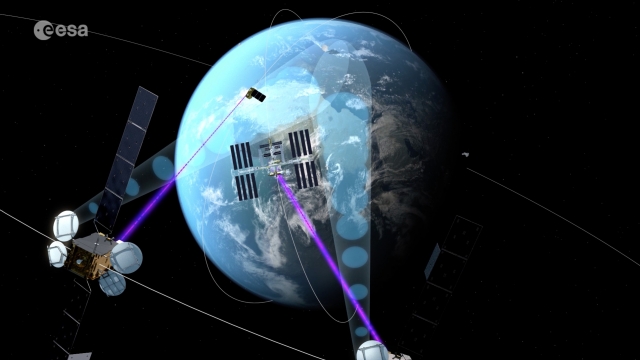 The European Space Agency just launched the first node in a new satellite network that could help first responders on Earth.

Lasers. In space. That's how the European Space Agency is planning to improve response time to potential issues back on Earth. And this week, it launched the first satellite in a new network to make that possible.

The new satellites could be used for a lot of things, from collecting up-to-date data about the environment to helping first responders in a natural disaster. They might even be useful in tracking piracy or pollution. In short, they could save lives.

That's because these satellites will relay information to Earth quicker than older satellites. How? They use lasers to communicate with one another, allowing for data to transfer at up to 1.8 Gigabits per second. That's about 150 times faster than the average Internet speed in America.

The new network collects pictures and data from those older satellites closer to Earth and then relays that information to the ground.

And while it sounds like adding an extra step would be slower, it's actually quicker this way. That's because the new satellites are located in geostationary orbit. We'll explain.

Normally, satellites only have a few minutes to send information back to Earth because they have to wait until they pass over a receiving dish. But the new satellites don't have to worry about that small window, because they stay fixed relative to receiving stations on the ground, meaning they orbit as fast as the Earth rotates.

The European Space Agency's director of telecoms told the BBC the network could lead to near real-time Earth observation.

This is just the first of the new satellites. Another one is scheduled to go up in 2017, and the space agency hopes to have the whole system ready to go by 2020.