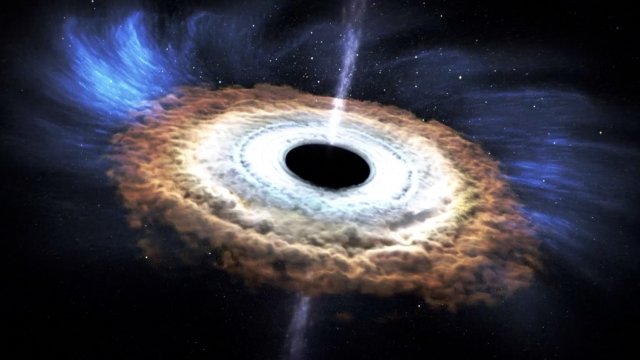 Astronomers are still puzzled about how super-massive black holes formed so soon after the Big Bang.

Super-massive black holes can reach masses of more than 10 billion times that of our sun. But we've only just begun studying them, and astronomers still aren't sure how they formed. Now, a new study gives us one possible answer.

The mystery is that super-massive black holes couldn't have formed like normal ones. Scientists know new black holes grow at a certain rate, usually taking a million years or more to reach a substantial size.

But scientists think super-massive black holes were already around about a billion years after the Big Bang — relatively early in cosmic terms. That's not enough time to reach their enormous sizes at anything like the normal rate.

What Existed Before The Big Bang?

Scientists have a few theories.

Instead, some researchers think super-massive black holes had help and that something about the early universe gave them an advantage.

The new study shows how that could've worked: Normally, gas clouds collapse into stars, which collapse into black holes. But in the early universe, powerful forces, like supersonic streams of gas and dark matter, kept the clouds from collapsing. So they grew larger until their gravity finally became powerful enough to overcome those obstacles, jump-starting an enormous black hole "seed" that's bigger than any new black hole today.

To find out for sure if this is how these giants got started, we have to peer back billions of years. Some space agencies are building ground- and space-based telescopes that can detect some of the oldest light in our universe and give us a closer look at the past.