Super Typhoon Nuri Is Stronger Than Sandy, Coming For U.S. 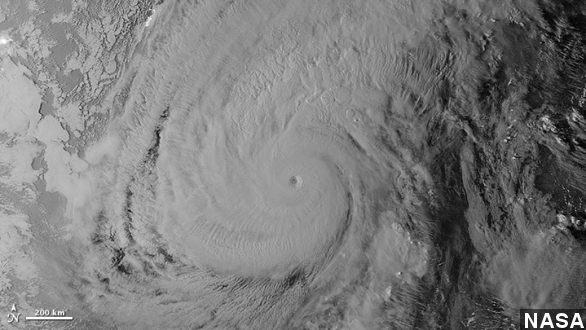 Typhoon Nuri could cause record conditions in the Bering Sea over the weekend, and that'll eventually drop temperatures significantly in the lower 48.

The U.S. is about to feel the true effects of late fall as Super Typhoon Nuri — a storm even stronger than Superstorm Sandy that caused this damage — makes its way through the extreme northwest portion of the country.

NBC's Al Roker took the angle of fascination as he did his "vortex dance."

AL ROKER, NBC: "And this is what's so great about weather. I mean, everything is interconnected. This is the strongest storm on the planet right now approaching the Aleutian Islands."

Once the storm hits Alaska, the polar vortex is expected to drop south and cut right through the heart of Canada and the U.S., dropping temperatures significantly next week. (Video via CBS)

But when analyzing the strongest storm on the planet, the default coverage seemed to center around two things: the comparisons to Sandy we already mentioned and trying to tell how the storm will affect the ships from a popular TV show, Discovery Channel's crab-fishing reality show "Deadliest Catch."

ARI SARSALARI, THE WEATHER CHANNEL: "They deal with some big storms, big waves. They'll fish through some of this stuff. I mean, look at some of those waves. ... Just imagine a four-story building. That's how high the waves are going to be. Just unbelievable stuff this weekend in the Bering Sea."

ABC also contacted the captain of one of the crab boats, Sig Hansen, who is already fishing in the Bering Sea for the fall season of king crab. (Video via Discovery Channel)

HANSEN, CAPTAIN OF NORTHWESTERN ON ABC: "I'm playing Russian roulette here. And at the same time, we're worried that this thing is going to change directions and come at us. And then what do you do? And so we are fearful because we do want to get in."

Pop culture references aside, the weather world has been tracking Typhoon Nuri for some time, even before it threatened Japan.

The Washington Post's weather blog Capital Weather Gang reports the storm could cause record conditions in the Bering Sea before having an effect on the lower 48 states next week.