Supercomputers Can Do Many Things ... Except Boost IBM Sales 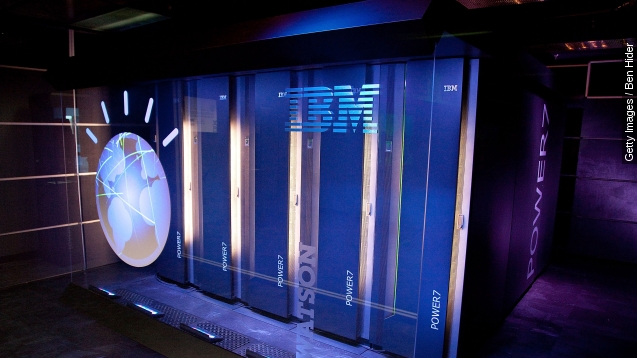 IBM's supercomputer Watson has matured greatly since its launch four years ago. But is it enough to keep the century-old company afloat?

IBM's intelligent supercomputer Watson may be best known for winning "Jeopardy!" in 2011.

But we're thinking execs over at IBM would rather it be known for its current work.

Watson is a "question-answering machine" that stands out in the crowd of other supercomputers with its enormous memory and speedy response time. It first hit the market for developers in 2013. (Video via IBM)

On discovery, Watson is currently assisting doctors and researchers at hospitals and universities to find new ways to improve patient care.

And you might have seen an IBM cookbook on the shelves at the bookstore recently. Yup, that's thanks to Watson's collaboration with the Institute of Culinary Education. The computer actually created new flavors.

But is all of Watson's work bringing in cash for IBM? Not quite.

"IBM disappointing Wall Street yet again. Sales lower than expected, falling from a year ago. Part of that is from the strong dollar; IBM gets more than half of its revenue from overseas." CNNMoney host Paul R. La Monica said.

Yesterday IBM announced the 13th straight period of falling revenue. Bloomberg reports, "IBM fell the most in nine months after reporting second-quarter sales declines across all of its major business units."

But developers are confident the tide will turn. IBM's senior vice president Michael Rhodin told The Street: "We have positioned ourselves very strongly within the realm of that combination of big data and knowledge. ... That's why we're seeing such success."