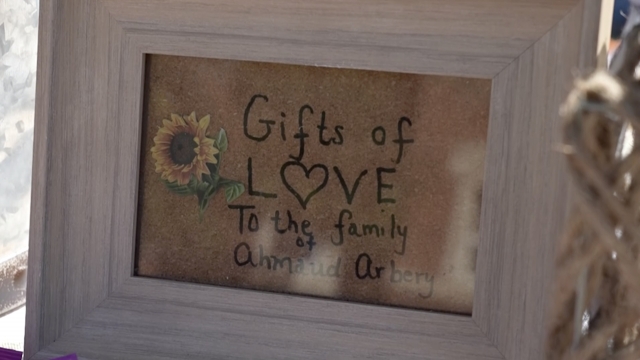 The coastal Georgia community has been thrust into the national spotlight as three white men stand trial for Ahmaud Arbery's murder.

Outside the Glynn County Courthouse is a show of support for Ahmaud Arbery's family.

Cameron owns Lady K's Kitchen. She said she's known the Arberys for years. So while the trial carried on Tuesday, she brought dozens of donated meals to keep everyone fed.

"I've always been wanting to help the community as best I can," she said.

The coastal Georgia community is thrust into the national spotlight as three men stand trial for Arbery's murder. Arbery's death sparked outcries and conversations around the country.

"It's a lot of stuff up in the air, like tension. People afraid that some stuff is going to get swept under the rug and, you know, justice won't be served," Cameron said.

Outside the courthouse out in the community, others are following the trial too.

"So everyone is basically looking for justice, but as a child of God and in the Christian community we look to God," said Pastor Todd Rhodes Sr. with Shiloh Missionary Baptist Church.

Rhodes said he and his congregation are in daily prayer since Arbery's death.

"We pray with and for our community, we pray for the court proceedings. We pray, also, for the family of Ahmaud Arbery, of course. In addition to praying for the Arbery family, we're also praying for the defendants and their families because this has impacted many families. We're praying for the jurors because it's impacting them, it's impacting their families. So what we're doing, my congregation and I, we're praying. We're prayerful that God's will is done. We're also seeking to do what we can to help everyone to remain together," said Rhodes.

Rhodes has lived in and served the community for nearly 13 years, after working for decades in law enforcement in Savannah.

"Everybody's hoping, everybody's praying, everybody's wanting the best for their side. But I believe if we can trust God through the whole thing, give it to him, continue to pray and be reflective of our prayers to him — being reflective meaning being inclusive and being supportive and being loving in this entire process — it'll help all of us," he said. "It'll help this community to heal as well as this nation. This isn't just subject to Brunswick, Glynn County. These are types of things that are happening unfortunately all over this nation."