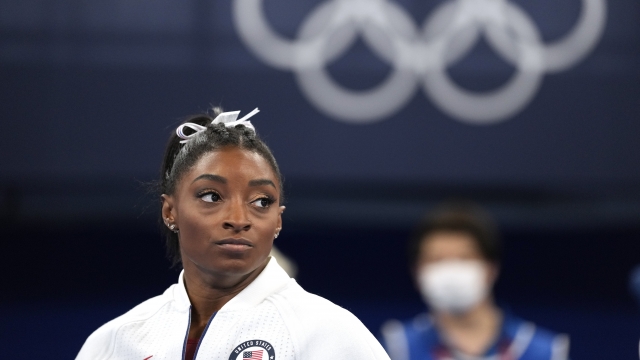 Biles did not compete in the all-around women's gymnastics competition after pulling out of the event to focus on her mental health.

Simone Biles is not in the all-around women's gymnastics competition this morning after pulling out of the event to focus on her mental health.Biles tweeted overnight that all the love she's received because of her decision has helped her realize – for the first time – that she's more than her accomplishments.We've seen an outpouring of support from all around the country and a renewed focus on the importance of taking care of yourself first, no matter what's at stake or how big the stage is.Four-time Olympic medalist Dominique Dawes spoke with Newsy, praising Biles and her decision.

Lee came up big for Team USA after Simone Biles withdrew from the all-around competition.

Olympic gold medalist swimmer Michael Phelps says he can relate to some of the struggles Biles is facing. Singer Justin Bieber also spoke out in support of Biles. He said sometimes saying no is just as powerful as saying yes.Biles' sponsors are also rallying behind her. From clothing brand Athleta to Visa, protein shake brand Core Power, United Airlines, Nabisco and Uber Eats.They all say they stand by Biles.