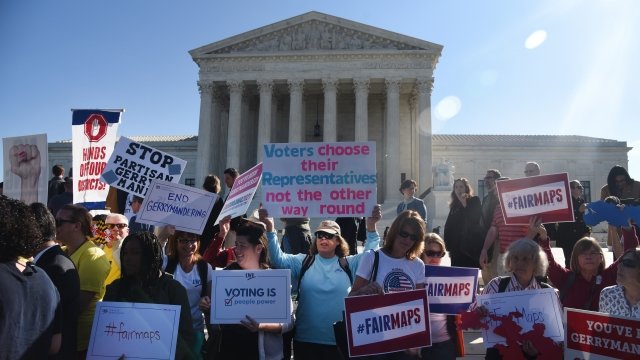 The Supreme Court will now hear gerrymandering cases from Texas, Wisconsin and Maryland.

The Supreme Court will hear three cases on political redistricting after adding a Texas gerrymandering case to its docket.

The case from Texas is a continuation of two Supreme Court rulings from September, when the high court decided to put on hold a lower court's ruling to redraw district lines for both federal congressional districts and the lower house of the state's legislature. The lower court argued the Texas map was partially drawn with intentional racial discrimination and thus required state officials to redraw the map. In a 5-4 vote along ideological lines, the Supreme Court blocked that ruling until it could review its merits.

The Supreme Court is also weighing in on two other cases of redistricting — one for Wisconsin and another for Maryland. In light of the 2018 elections, these cases are especially tricky and made even trickier because of a fraught history on redistricting rulings.

The Supreme Court is set to hear oral arguments in a case that challenges Ohio's policy of dropping infrequent voters from its registration rolls.

Opponents of federal court-enforced redistricting argue the Constitution allows states to set rules for federal elections. Some judges argue that while states can be checked on that power, the political nature of the issue only allows Congress to do so.

Other judges argue gerrymandering in some cases violates the Constitution's equal protection provision, which prohibits states from denying any person equal protection of the laws. Federal judges made this argument when they ruled North Carolina must redraw its congressional map.

That ruling to block a congressional map because of a partisan gerrymander was the first of its kind.