How Amy Coney Barrett's Confirmation Could Impact Control Of Senate 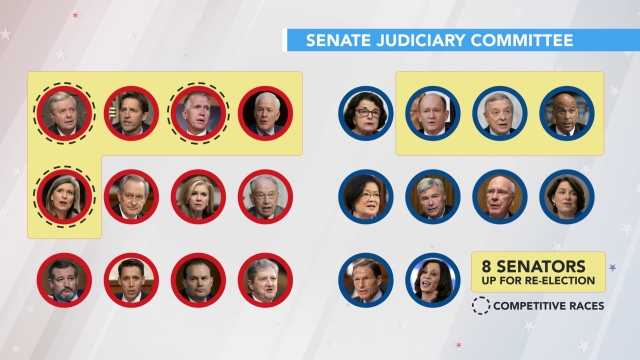 The high-stakes Supreme Court confirmation hearings for Judge Amy Coney Barrett could have significant impact on the control of the Senate.

"Nobody should be voting on a Supreme Court nominee right now," Kentucky Democratic Senate candidate Amy McGrath said Monday night during a debate with her Republican challenger, Sen. Mitch McConnell.

"An absolute legal all-star, and so the judiciary committee, you saw, today wants to talk about anything other than the nominee. This is the progressive position," McConnell said at the debate, referring to Barrett's Supreme Court confirmation hearings.

"This is going to be a long, contentious week," said Senate Judiciary Chairman Lindsey Graham, R-S.C., in kicking off the hearing.

The 22-member panel features eight senators up for for re-election—some locked in competitive races—with polls showing many Americans feel Congress should wait until next year to fill the vacancy.

Candidates from both parties are hoping the nomination battle will mobilize their supporters to turn out on Election Day. Like Democrat Jaime Harrison, who raised a record-setting $57 million over three months in his bid to unseat Sen. Lindsey Graham, R-S.C.

"If a race is sufficiently close, almost anything can make a difference and that means that, in principle, a vote either for or against Amy Coney Barrett, depending on the political dynamics of the state, could make a difference," explained Justin Buchler, an associate professor of political science at Case Western Reserve University.

So far, Sen. Susan Collins, R-Maine, is the only Republican up for re-election who has said she'll vote against Barrett.

"It's not a comment on her. It is a comment on the process of rushing through a nomination in such a short time before a presidential election," Collins explained in an interview Monday with WGME.

Others, like McConnell, have seemed to break with the president in recent days on issues like health care.

"No one believes the supreme court is going to strike down the Affordable Care Act," McConnell said Monday night during his a debate with McGrath.

"Republicans are clearly worried about control of the Senate," said Buchler. "I think they're clearly worried because they see that Trump's candidacy is doing poorly. They just don't really have any good options available to them because there's nothing they can do to separate themselves from him anymore."