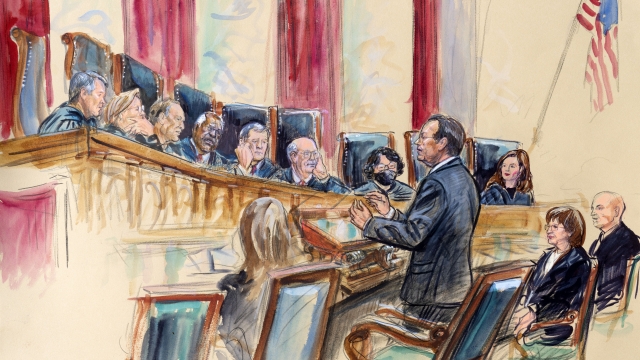 At issue is a New York state law that requires citizens to demonstrate a specific need if they want a license to carry a concealed weapon.

For the first time in over a decade, the Supreme Court heard arguments in a case addressing the Second Amendment.

At issue is a New York state law that requires citizens to demonstrate a specific need if they want a license to carry a concealed weapon.

The case centers around two New York residents who were denied an unrestricted permit to carry a gun.

"Carrying a firearm outside the home is a fundamental constitutional right. It is not some extraordinary action that requires an extraordinary demonstration of need,” said Paul Clement, the attorney for New York State Rifle and Pistol Association

The justices seemed to express some concern that, if the law were rolled back, it could result in people bringing guns into crowded places like sports stadiums and public transportation.

"I think that people of good moral character who start drinking a lot and who may be there for a football game or – or some kind of soccer game can get pretty angry at each other. And if they each have a concealed weapon, who knows?" said Justice Stephen Breyer.

But Chief Justice John Roberts questioned whether Americans should have to ask permission to access a constitutional right.

"Regardless of what the right is, it would be surprising to have it depend upon a permit system. You can say that the right is limited in a particular way, just as First Amendment rights are limited, but the idea that you need a license to exercise the right, I think, is unusual in the context of the Bill of Rights," said Chief Justice Roberts.

Six other states, including California, have similar laws. So if the justices decide to strike down the New York law, it could have an impact on millions of Americans across the country.