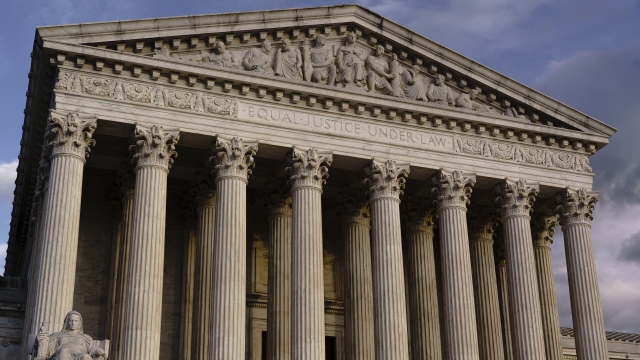 Puerto Ricans are United States citizens but they don't enjoy the same government benefits as most Americans.

Puerto Ricans are United States citizens but they don't enjoy the same government benefits as most Americans.

"When Puerto Rico is included in a program sometimes it's defined as a state and sometimes it's not," said U.S. deputy solicitor general Curtis Gannon.

Tuesday, the Supreme Court heard arguments in a case that could change that for the island's three million plus residents after one of its own has brought a lawsuit before the nation's highest court.

Jose Luis Valleo-Madero was born in Puerto Rico but was living in New York when he became sick and unable to work. He started receiving government assistance and then moved back to Puerto Rico one year later. Once the government learned of the move, not only did he lose the benefit, he was sued for more than $28,000 – the money he received from the government after he moved back.

Valleo-Madero argues this is a violation of the Constitution's equal protection clause because if he had moved to another state, like Florida, he would have continued to get checks in the mail – no problem.

"Needy is needy," Justice Sonia Sotomayor said. "Whether in Puerto Rico or in the mainland. None of the people who receive it on mainland pay taxes."

The benefit – called Supplemental Security Income — is a program for low-income individuals who are disabled or above the age of 65. It applies to citizens of all 50 states, the District of Columbia and the Northern Mariana Islands. Puerto Rico and other territories have not been included in the benefit since Congress passed the law in 1972 — even though they pay federal taxes just like other states and DC.

"The government's argument here as well, Puerto Rico as territory pays less in income taxes into the general treasury," SCOTUSblog editor James Romoser said. "And so therefore, it's rational for Congress to want to exclude the territory from this government program. Of course, this response on the other side is that this particular benefit, Supplemental Security Income, has something to do with income taxes. And the vast majority, if not all, people who are receiving these benefits are very low income and don't pay income taxes at all."

Territories have tried, unsuccessfully for decades, to be included in these kinds of programs but the Court thus far has said Congress has broad latitude to exclude territories.

Lower courts supported Vaello-Madero and if the nation's highest Court does as well, these benefits could be available to any American. If not, these territories could lose out on future benefits too.

"One concern raised by some of the liberal justices this morning was that if the court green lights this sort of differential treatment, in the case of this program, then that basically sends a message to Congress, it can do this – whatever it wants," Romoser said. "It could exclude Puerto Rico or other territories, or  potentially even states from specific federal benefit programs. And in the case of territories, like Puerto Rico, the presidents have no voting representation at the federal level, they have no political power and so they'd have very little recourse to fight back against that kind of treatment."

President Biden supports the people of Puerto Rico being covered by these types of programs saying, "There can be no second-class citizens."

But his Justice Department is the one arguing against Valleo-Madero, saying it's Congress' responsibility to change who gets the benefit, not the Court.