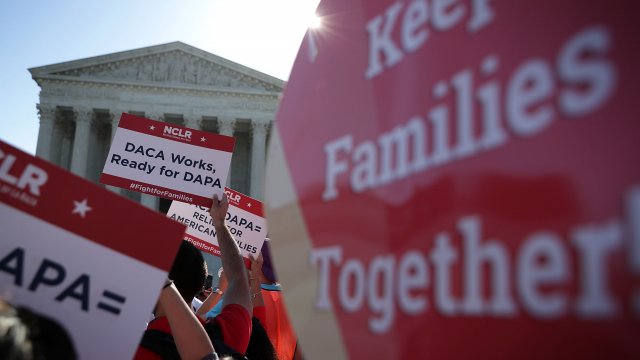 The high court is scheduled to hear oral arguments Tuesday over President Donald Trump's attempt to end DACA in 2017.

The future of the Deferred Action for Childhood Arrivals Program — also known as DACA — is officially in the hands of the Supreme Court.

On Tuesday, the high court is scheduled to hear oral arguments over President Donald Trump's attempt to end DACA in 2017.

The case before the court is actually three separate cases consolidated into one. The justices have two questions to answer: Do federal courts have the power to review President Trump's efforts to shut DACA down? And if so, were those efforts legal?

The Obama-era program protects from deportation more than 700,000 undocumented immigrants who came to the U.S. at a young age.

Lower courts have blocked the Trump administration's attempts to end DACA. But many analysts expect the Supreme Court to allow the government to strike the program down.

The justices are expected to issue a ruling this summer.