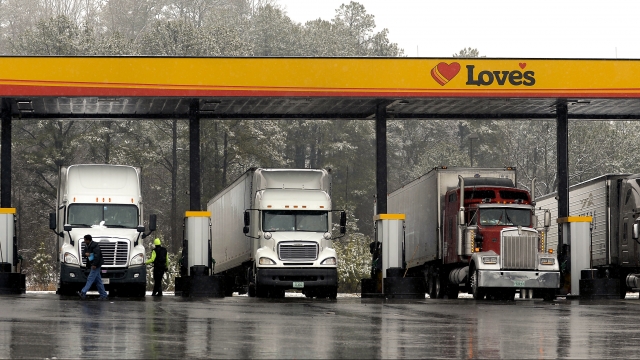 The trucking industry had to navigate the slowdown of the pandemic, only to be knocked down again by skyrocketing fuel prices.

Truck drivers move 72% of goods in the U.S. and are vital to keep the shelves stocked at your local stores. But as diesel prices tick up to an all-time high, it's putting a squeeze on an industry that's already hurting.

The nationwide average is 5 cents below the highest price in history — $4.43, set on March 11.

Diesel gasoline prices reached an all-time high this week across the nation and it's only one aspect putting truck drivers and other businesses in a pinch.

Many truck drivers operating independently are having to bear the cost of leasing their rig, gas, insurance and maintenance costs.

Experts say these high fuel prices could push drivers off the road and out of the profession.

Most 18-wheelers only get about six to eight miles per gallon, and while gasoline is up 26% this year, diesel fuel is up about 43%.

Russia is one of the world's largest producers of diesel, so the war in Ukraine is part of the reason behind the global tightening of the market.

Diesel fuel hit a national average of $5.53 per gallon, and the jump in prices could ultimately affect the cost of goods.

Some trucking companies are trying to hold the line by eating some of the rising costs.

"We are eating it a lot," truck driver Dana Hamblin said. "Customers act like they don't understand, that in order for us to survive and move your freight, it's based off fuel."

However,  many are passing along the additional costs to consumers, sending prices on everyday goods like milk, bread and eggs through the roof.

The spike in fuel prices is forcing some vendors to add a fuel surcharge that wasn't there before.

Those surcharges are tacked on the bills and store owner Adam Zach says there's not much he can do about it.

"It's something we pay directly," he said. "So it definitely contributes to inflation and the cost of the products."

Meanwhile, other higher costs include tires and wheels. One brand has raised prices on its truck tires three times since July since the cost of labor and parts is up about 8.8%.

For those owner-operated drivers who pay their own expenses — they've navigated the slowdown of the pandemic, only to be knocked down again by skyrocketing costs.

According to the American Trucking Association, the industry was short a record 80,000 drivers in 2021.

To help revamp the trucking industry, the Biden administration has announced a plan to get more truckers on the road. But the cost of fuel could create yet another roadblock.