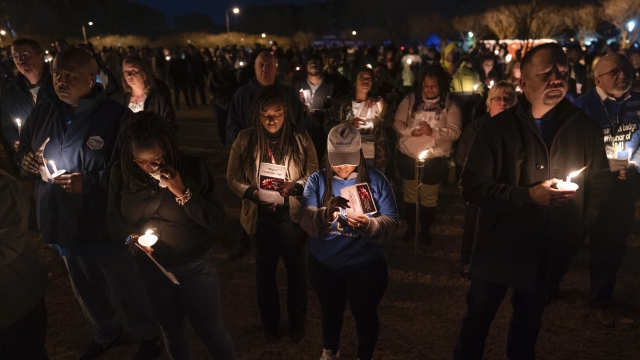 A Walmart store supervisor fatally shot six employees and wounded several others before he died of an apparent self-inflicted gunshot.

A Walmart employee who survived last week's mass shooting at a store in Virginia has filed a $50 million lawsuit against the company for allegedly continuing to employ the shooter — a store supervisor — "who had known propensities for violence, threats and strange behavior."

The lawsuit, which appears to be the first to stem from the shooting, was filed Tuesday in Chesapeake Circuit Court by Donya Prioleau. Walmart, which is headquartered in Bentonville, Arkansas, did not immediately respond to a written request seeking comment on the litigation.

Prioleau's suit alleges that she has experienced post-traumatic distress disorder, including physical and emotional distress, from witnessing the rampage in the store's breakroom on Nov. 22.

The gunman, identified as an employee at the Walmart location, opened fire in the employee break room.

"Bullets whizzed by Plaintiff Donya Prioleau's face and left side, barely missing her," the lawsuit states. "She witnessed several of her coworkers being brutally murdered on either side of her."

The store supervisor fatally shot six employees and wounded several others before he died of an apparent self-inflicted gunshot, police said.

The lawsuit alleges that he "had a personal vendetta against several Walmart employees and kept a 'kill list' of potential targets prior to the shooting."

The Walmart supervisor who shot and killed six co-workers in Virginia seemed to target people, a witness said.

The lawsuit also states that Prioleau had submitted a formal complaint on a Walmart Global Ethics Statement Form indicating that the shooter had "bizarrely and inappropriately commented on Ms. Prioleau's age."The lawsuit alleges that he told her: "Isn't your lady clock ticking? Shouldn't you be having kids?"

Prioleau also complained that the supervisor had harassed her for "being poor and being short," according to the lawsuit.

The lawsuit states that she also informed Walmart that he called her a "bitch" under his breath."Despite [the supervisor's] long-standing pattern of disturbing and threatening behavior, Walmart knew or should have known about [his] disturbing and threatening behavior, but failed to terminate [him], restrict his access to common areas, conduct a thorough background investigation, or subject him to a mental health examination," the lawsuit states.