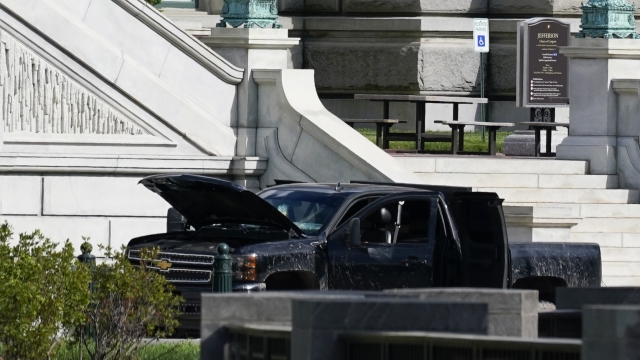 A North Carolina man who claimed to have a bomb in a pickup truck near the U.S. Capitol surrendered to law enforcement after an hourslong standoff.

A North Carolina man who claimed to have a bomb in a pickup truck near the U.S. Capitol surrendered to law enforcement after an hourslong standoff Thursday that prompted a massive police response and the evacuations of government buildings in the area.

Police did not immediately know if there were explosives in the vehicle, but authorities were searching the truck in an effort to understand what led the suspect to drive onto the sidewalk outside the Library of Congress, make bomb threats to officers and profess a litany of antigovernment grievances as part of a bizarre episode that he live-streamed for a Facebook audience.

The standoff was resolved peacefully after roughly five hours of negotiations, ending when the suspect crawled out of the truck and was taken into police custody. But even in a city with a long history of dramatic law enforcement encounters outside federal landmarks, this episode was notable for its timing — Washington remains on edge eight months after the insurrection at the U.S. Capitol — and for the way the suspect harnessed social media to draw attention in real time to his actions.

Authorities who spent hours negotiating with the suspect — first using a dry erase board and then bringing him a telephone that he refused to use — were digging into his background Thursday afternoon. They did not reveal any details about a motive, and no charges were immediately announced.