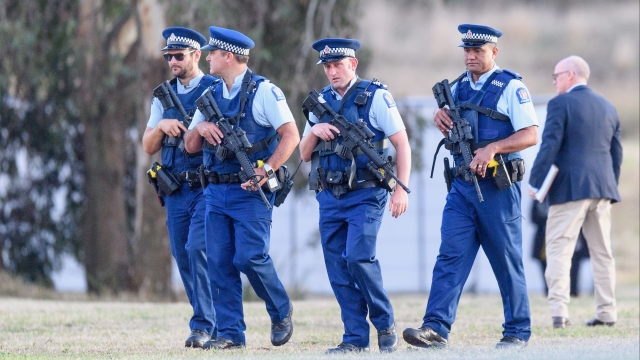 Fifty people died and dozens of others were injured following shootings at two mosques in Christchurch on Friday.

Authorities in New Zealand believe the man suspected of carrying out the deadly attacks in Christchurch was on his way to a third location when he was apprehended by police.

"We strongly believe we stopped him on the way to a further attack. So lives were saved by our staff, courageous in their intervention," Police Commissioner Mike Bush told reporters Wednesday.

Fifty people died and dozens of others were injured following shootings at two mosques on Friday. The suspect has been charged with murder in connection with those shootings. Prosecutors are expected to file more charges against him.

New Zealand Police Commissioner Mike Bush said police are working with the FBI and other international investigators "to build a comprehensive picture" of the suspect.

"Of course, we would like to do this as quickly as possible, but it must be done as professionally and accurately as possible," Bush said.

On Wednesday, the first funerals were held for victims of the attacks. As Newsy's previously reported, Muslims traditionally try to cleanse and bury the dead as soon as possible, often within 24 hours. But that burial process has been delayed by a complex identification process.

Prime Minister Jacinda Ardern announced the country will hold two minutes of silence on Friday to remember the victims. The Islamic call to prayer will also be broadcast on national TV and radio that day.