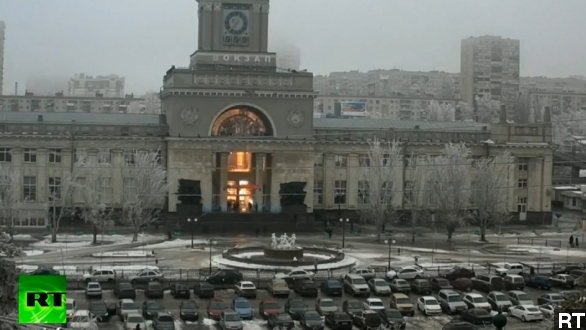 Authorities say a suicide bomber has killed more than 13 people and injured dozens more at a Russian train station.

Authorities say a suicide bomber has killed more than 13 people and injured dozens more at a Russian train station.

The explosion took place at Volgograd railway station in southern Russia. Russia's National Anti-Terrorism Committee is blaming a female suicide bomber for the attack. (Via RT)

Video from the scene shows this man's body laying next to an ambulance on the scene and paramedics rushing to help the injured to the hospital. (Via YouTube / Union Volunteers Russia Volgograd)

This attack in Volgograd follows another in October where a female suicide bomber killed 6 people and injured another 30 on a city bus. (Via CNN)

With the Winter Olympic Games set to take place two months from now in Russia, many observers believe this attack could be setting the stage for more tragedy during the games.

"Moscow is concerned militant groups could be ramping up violence in the run up to the the 2014 winter Olympic Games in the city of Sochi in six weeks." (Via BBC)

And according to The Moscow Times in July, an insurgent leader in Russia posted a video online encouraging terrorists to use "maximum force" to prevent the winter games. RT reports, the regional government will be paying the families of the victims killed by the bombing $30,000 each.