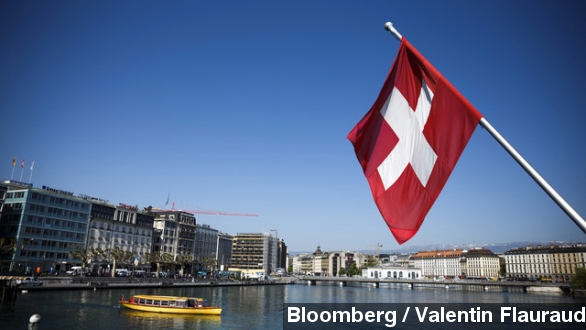 Sunday Switzerland voted on the 1:12 initiative that would restrict top executives' payouts. It was stuck down in a landslide vote.

Swiss voters have struck down a proposal to restrict the pay of corporate executives.

The plan, dubbed the "rip-off" initiative by some members of the press, was shot down in a 65 to 34 percent vote. (Via Gfs.bern)

"In a county of big banks and big business, curbing the wages of top bosses in Switzerland is a contentious issue. … The most important executives in a company will simply not work in Switzerland anymore." (Via Al Jazeera)

The youth wing of the Swiss Social Democratic Party brought about the measure, called the 1:12 initiative. It would have restricted executives from earning more than 12 times the amount made by their lowest-paid employees. ­(Via The Independent)

In other words, an executive could not make more in a month than a worker makes in a year.

In Switzerland's democracy, citizens only have to gather 100,000 signatures to force a nationwide vote — that's what happened in this case. (Via The Guardian)

And although the proposal was struck down, there still seems to be much discontent with executive payouts.

"Despite its high standard of living, Switzerland has become uncomfortable as executives' wages soar while those of low-skilled workers lag. … But this latest proposition looks to have been a step too far." (Via Euronews)

A step too far, suggests The New York Times' Jack Ewing, because while there might be anger about executive pay, Swiss voters don't seem comfortable with government-imposed salary caps.

Ewing characterizes Switzerland as light on regulation when it comes to business — part of the reason so many banks and hedge funds are based there.

But in some cases, Swiss executives make more than 200 times what their employees take home, contributing to a widening wage gap. (Via BBC)

Switzerland has pretty low unemployment at just 3 percent. But Roth told NPR out of the 8 million citizens, 400,000 don’t even make enough money to live on.

"I think we have to change something, because otherwise we'll go in a direction like the USA did in the last decade where people get homeless, for example, and other people had millions of dollars. … It's a big problem if you have such inequality in a rich country."

Next year, Swiss voters will decide whether there should be a guaranteed minimum wage of about $2,800 per month. (Via RT)