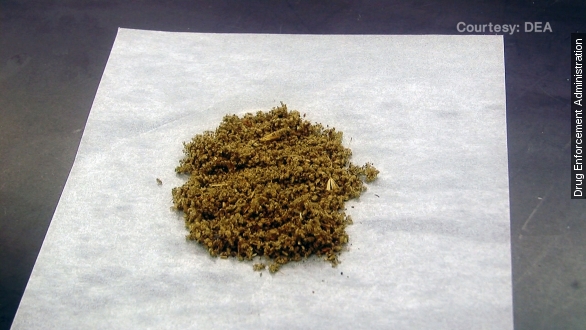 The number of people exposed to synthetic marijuana drastically spiked in the first three weeks of April, causing death in come cases.

Mississippi, New York, Texas, Pennsylvania — just four of the states that have seen an increase in people being hospitalized after using a synthetic drug.

Just in the month of April, more than 1,000 people around the country were treated at poison centers after being exposed to synthetic marijuana, also known as Spice or K2, according to the American Association of Poison Control Centers.

Synthetic marijuana usage has gotten attention in the past and the number of "exposures" has decreased over the past few months, but authorities are now on alert because of a sudden spike in April.

In some cases, people who smoked the synthetic drug have died — although the total number of fatalities this year isn't available.

​Spice is a drug that can be found in some convenience stores around the country and is marketed as incense or potpourri — a loophole to avoid the Food and Drug Administration's anti-drug regulations.

And the constantly changing ingredients of Spice also make it hard for federal agencies to control it.

One police officer told KFOR, "They continually change the molecular structure. ... And they think they've got a loophole that they can legally distribute this stuff."

"Investigators say the synthetic substance can be ten to 800 times stronger than THC."

Those changing ingredients and high potency could be a reason for the recent spike in overdoses. According to USA Today, some doctors believe there could be a bad batch causing the increase in hospital visits.

CNN reports, "What it is is actually chemicals, sprayed on plants. ... So where are the drugs coming from? Mostly from labs in China where the chemicals are produced and exported in bulk. "

Forty-four states have actually taken legal action to ban some ingredients, but it seems to be an uphill battle. When Spice first gained steam in 2009 there were just two strands found. Compare that to the 51 different kinds found in 2012.

Of course, legalizing actual pot could stop people from smoking Spice. It's a similar situation to Prohibition, as one doctor told Forbes, "where people made bathtub gin with methanol."

Hallucinogens like LSD and a compound of meth have been used as ingredients in previous Spice strains.

This video includes images from the Drug Enforcement Administration.