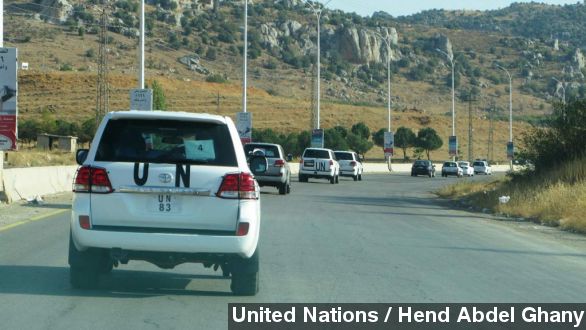 The Organisation for the Prohibition of Chemical Weapons announced Friday all of Syria's weapons used to deliver chemical attack are destroyed.

The international watchdog organization tasked with eliminating Syria's chemical weapon stockpiles announced Friday it has taken another step toward that goal — by getting rid of the munitions that could be used to deliver chemical weapons.

The Organisation for the Prohibition of Chemical Weapons says it has destroyed all of Syria's unfilled munitions that could carry chemical weapon payloads. In October, the group announced it had destroyed all the equipment needed to manufacture chemical weapons. (Via Fox News)

The OPCW has been working to disable Syria's chemical weapons since late September, one month after a chemical weapon strike near a Damascus suburb killed 1,400 people. Syria agreed to surrender its arsenal after facing pressure from the international community. (Via CNN)

And despite heavy skepticism that Syria could be safely disarmed in the midst of heated civil war, the OPCW has made steady progress toward its goal of destroying Syria's chemical weapons by mid-2014.

Of course, the group's most challenging task is yet to come: finding a way to destroy the volatile chemical agents used as components in mustard and sarin gas. Trying to neutralize those agents in the middle of a war zone would be next to impossible, and no nearby country wants to host the process. (Via BBC)

So the current plan is to destroy the weapons at sea. The U.S. has volunteered to retrofit an old cargo ship with the necessary equipment to neutralize Syria's chemical weapons, which would be delivered to the port of Latakia and shipped out to the floating destruction lab. (Via The New York Times)

It's a dangerous and unprecedented operation, and a Foreign Policy writer says it's practically impossible to accomplish in the OPCW's timetable.

"The disposal equipment being installed onto the Cape Ray has never been tested at sea, and it's not clear that it will be capable of operating continuously for months without breaking down. The U.S. and its allies will also need to find a way of ensuring that none of the weapons are stolen or damaged. ... To say it will be a challenge is the grossest of understatements."

Officials from the OPCW say the seaborne disposal lab should pose no environmental or health hazard, and a U.S. official added none of the chemical weapons will be dumped into the the sea.