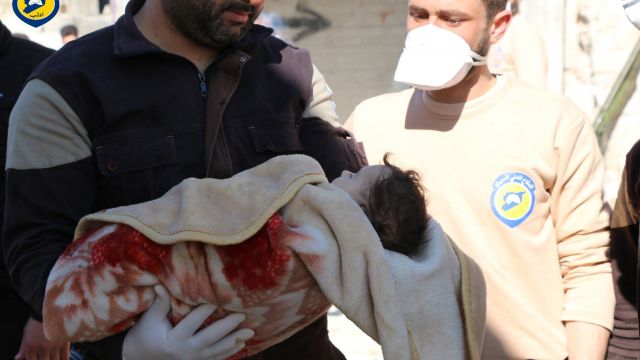 The U.S. government has condemned the attack and suspects Syrian leader Bashar al-Assad's regime is behind it.

At least 58 people, including 11 children, have been killed in a suspected chemical attack in northern Syria.

Numbers of those injured in the attack ranged from 160 to as many as 300.

Graphic videos and images posted by activists and locals showed people foaming at the mouth, convulsing, struggling to breathe or lying motionless.

People reported symptoms shortly after a northwestern city was hit by airstrikes — thought to be carried out by either Russia's or Syria's government.

A hospital treating victims in the attack and two Syrian Civil Defense centers in the area were also bombed.

Chemical Weapon Attacks Are A New Normal For Syrians

A February report from the Syrian American Medical Society documented 161 chemical attacks since the conflict began. It's already out of date.

Doctors couldn't immediately identify what was used. Chlorine is common in chemical attacks, but victims in this one had far more severe symptoms. Some think a nerve agent like sarin might've been involved.

If this was a chemical attack, it will be one of the worst of its kind in Syria's six-year conflict. A sarin attack in 2013 in the opposition-held Ghouta region killed more than 1,400 people.

France has called an emergency U.N. Security Council session to discuss the attack.