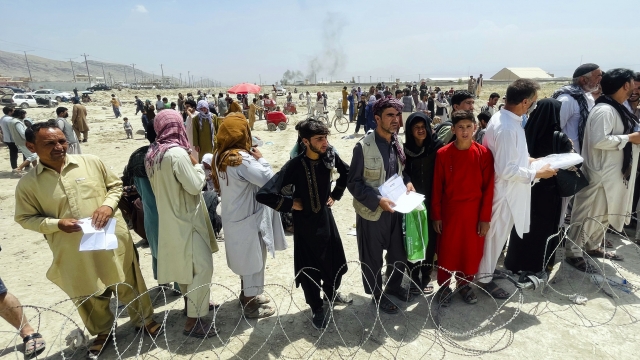 The United Nations is already getting reports of human rights abuses in areas under Taliban control.

The Taliban say they'll stop Afghans from getting into Kabul's international airport to flee the country.

That announcement was made by a Taliban spokesman Tuesday, as thousands are still desperate to escape more than a week after the group took the capital.

Pentagon officials say evacuation flights are taking off every 45 minutes.

The Taliban won't let the U.S. and allied troops stay past August 31 – even to complete evacuations. President Biden reportedly plans to stick to that deadline.

Meanwhile, one prominent Afghan filmmaker who fled urged the world not to recognize the Taliban as Afghanistan's rightful rulers.

"I beg you, please, tell your husbands not to give them recognition," Sahraa Karimi said. "If they give the Taliban political recognition, if they accept them, then they will destroy our lives, women's lives."

And the United Nations is already getting reports of human rights abuses in areas under Taliban control.

That includes reports of summary executions, recruitment of child soldiers and restricting the rights of women.

U.N. Human Rights' Chief Michelle Bachelet said, "A fundamental red line will be the Taliban's treatment of women and girls and respect for their rights to liberty, freedom of movement, education, self-expression and employment, guided by international human rights norms."

The U.N. also warns Afghanistan could start running out of food within a matter of weeks as key deliveries are being held up by the chaos at Kabul's airport.