Taliban Tries To Rebrand Itself, But Words May Not Match Actions 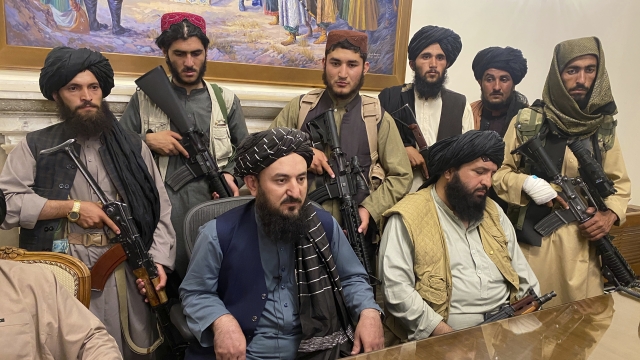 The Taliban is banking on a renewed public image to gain international recognition. But reports suggest the group's words may not match its actions.

The Taliban is working on its brand after regaining power.

And even sat down for an interview on a national Afghan network, sharing the Taliban’s first comments on how they’d rule.

The official declaring an “amnesty” across Afghanistan, urging women to join their government.

"I think an Afghan inclusive government, this is the demand."

The Taliban promising “an open and inclusive Islamic government,” a far cry from its rule 20 years ago.

From 1996 to the US-led invasion in 2001, the Taliban enforced a strict version of sharia law.

The group barred most women from working or studying.

If a woman wanted to leave her home, she had to be accompanied by a male guardian.

Public executions and floggings were common.

This is the Taliban’s track record.

“If you question them, if you ask for the rights, your throat will be slit.”

The group’s resurgence begs the question... will history repeat itself? What could Taliban rule look like for nearly-40 million Afghan people?

“I would say that they will adopt the same policies that they used to practice during the first round of regime, and it may be more brutal than what it was.”

The Associated Press already reports scenes of civilians being shot dead in other parts of Afghanistan.

Some residents telling the Wall Street Journal those accused of crimes have been executed, their bodies put on display as warnings.

Some women have reportedly been lashed for their choice of footwear—said to be too revealing.

Some Afghan people support the Taliban and its values... especially in rural communities and in Kandahar, the Taliban’s spiritual birthplace. They say any rule is better than decades of instability.

But pressure to change is building.

“If they want support, if they want sanctions lifted – all of that will require them to uphold basic rights, fundamental rights.  If they don’t and if they’re in a position of power and they don’t do that, then I think Afghanistan will become a pariah state.”

And even those trying to flee Afghanistan are reporting Taliban checkpoints at every turn of the road. The Taliban, now surrounding the airport in Kabul.