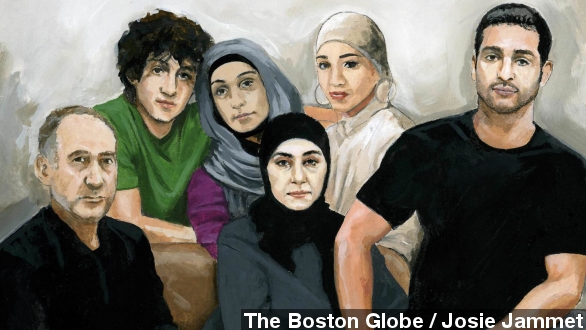 An article by The Boston Globe indicates Tamerlan Tsarnaev might have been hearing voices in his head prior to the bombing at the Boston Marathon.

​New details have surfaced about the lives of Boston bombing suspects Tamerlan and Dzhokhar Tsarnaev, including revelations of mental illness and a dysfunctional family history.

A five-month investigation by The Boston Globe indicates Tamerlan, the elder of the two brothers who was killed in a violent police shootout, had told friends he was hearing voices in his head.

According to the Globe's reporters, Tamerlan confided to a friend that the voices had some kind of physical control over him. At one point the friend says Tamerlan sounded as though he was afraid of the voices. (Via FBI)

A controversial article by Rolling Stone back in July had first visited the issue of Tamerlan's questionable mental health.

It briefly touched on an encounter between Tamerlan and his mother when he said he felt like he had two people living inside of him. (Via Rolling Stone)

Instead of urging him to see a doctor or mental health professional, Tamerlan's family directed him to turn to Islam for a cure, according to the magazine. (Via The Inquisitr)

The Globe investigation suggests previous accusations that Tamerlan was influenced or directed by jihadist revolutionaries in Chechnya are unlikely. (Via The Wire)

It also portrays both brothers as products of a dysfunctional family with a violent past. And it raises the question of whether the boys' father led the family to America to flee the Russian underworld. (Via CNN)

The family's neighbors told reporters the boys' father was once abducted by the mob and tortured for a week. Mobsters reportedly beheaded their dog.

Dzhokhar is currently on trial for killing three people and injuring hundreds in the bombing and subsequent manhunt that took his elder brother's life. (Via The New York Times)

Before the bombing, he attended the University of Massachusetts Dartmouth. He was reportedly flunking out, and his fellow classmates say he'd been selling large quantities of marijuana. (Via ABC)

The new revelations paint the brothers in a similar light as people such as Aurora shooting suspect James Holmes and the Oklahoma City bombers, with mental health problems at the center of their motivations. (Via KMGH)

Attorney General Eric Holder is reportedly still deciding whether to pursue the death penalty in the case against Dzhokhar.