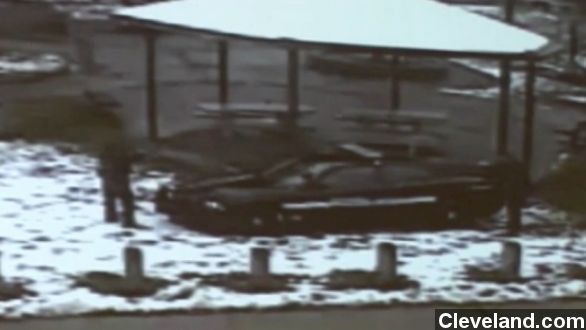 Unlike the shooting in Ferguson, Rice's shooting was chronicled by a surveillance video, which was released Wednesday.

Just two days after a grand jury chose not to indict police officer Darren Wilson for killing Michael Brown, another black male's death by police has grabbed America's attention. This time, a 12-year-old named Tamir Rice was killed Saturday while playing with a toy gun.

Unlike the shooting in Ferguson that has ignited protests across the nation, Rice's shooting was chronicled by a surveillance video — which was released to the public Wednesday.

"The guy keeps pulling it in and out of his pants. It's probably fake, but you know what? He's scaring the s--- out of people," an anonymous caller told Cleveland dispatchers. (Video via WEWS)

A neighbor called the police on Rice saying the boy was reportedly scaring people with what was believed to be a toy gun.

And while the video doesn't exonerate Cleveland Police Department of any wrongdoing, it has sparked questions about why Rice was killed so quickly with many media outlets making sure the word "seconds" was in their headlines.

Along with the actions of the police department, an article by Cleveland.com has also been brought into the spotlight by observers.

"Tamir Rice's father has history of domestic violence" is the bold headline of an article chronicling some of the family issues the 12-year-old boy had to live with.

But why? Rice's family history doesn't have anything to do with his death and it doesn't shed any light on the shooting.

Some view the article the same way many viewed the release of this surveillance video of Mike Brown robbing a convenient store before his death — a smear campaign to dirty the name of the deceased. One man tweeted in regards to the article, "They about to drop every time tamir rice was ever sent to timeout. He was no angel, I'm sure"

That "no angel" line is a reference to a controversial article by The New York Times that profiled some aspects of Brown's life while also saying he "was no angel."

The killing of Tamir Rice brings to mind the killing of yet another black man by the police carrying a toy gun. John Crawford III was shot an killed in a Walmart by police in early august. The police officers involved in that killing were not indicted. (Video via Beaver Creek Police Department)

The two officers involved in the Rice shooting are on paid administrative leave while the Cleveland Police Department investigates.