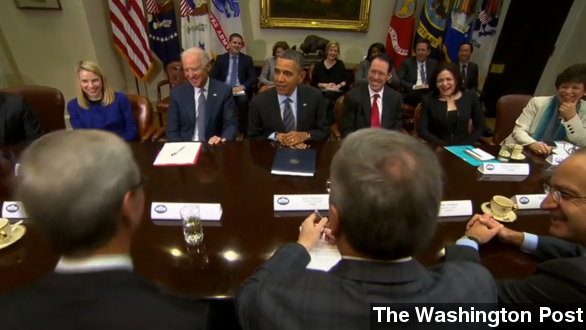 Representatives from the tech industry met with President Obama this week and continued to push for NSA surveillance reform.

Representatives of major tech companies met with President Obama Tuesday and took the opportunity to press the administration on NSA surveillance reform.

The White House had indicated ahead of the meeting it intended to focus on the Obamacare website and federal IT development.

But The Washington Post reports the attendees — a who's who of the tech sector including Google chairman Eric Schmidt, Apple CEO Tim Cook and Yahoo! CEO Marissa Mayer — turned the conversation to an overhaul of the NSA's data-gathering practices.

The assembled representatives had specific changes in mind. They want the administration to:

Closely define the limits on how it can compel Internet companies to hand over user data; increase the oversight of the NSA and those agencies collecting the data; and give Internet companies the freedom to disclose the nature and frequency of Government requests for data. (Via USA Today)

The goals are the same as those outlined in an open letter to administration and congress earlier this month. "The balance in many countries has tipped too far in favor of the state and away from the rights of the individual — rights that are enshrined in our Constitution." (Via Reform Government Surveillance)

Following the meeting, the White House said "we will consider their input as well as input of other outside stakeholders as we finalize our review of signals intelligence programs." (Via Politico)

And the pressure is now officially on for this review: a judge in district court on Monday ruled the NSA's phone data dragnet was "likely unconstitutional."

According to The Guardian, a Justice Department representative said the administration was aware of the ruling, but for the moment believed the program was constitutional.