Teen Vaping Drastically Increased Over The Past 2 Years 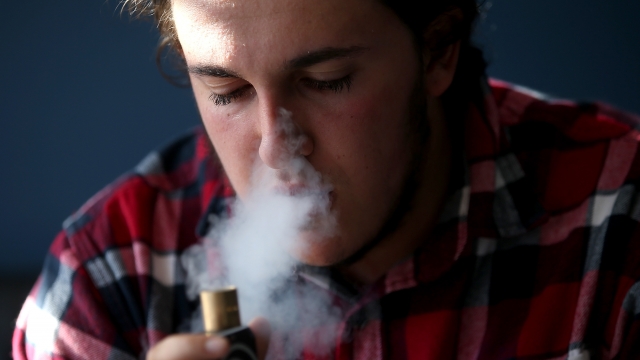 One in four high school seniors said they had vaped nicotine in the past 30 days, according to a new study.

The rate of teens using e-cigarettes has doubled over the past two years.

That's according to a study published Wednesday in the New England Journal of Medicine. Researchers surveyed over 43,000 students in three grade levels. They found that 25% of high school seniors said they vaped nicotine in the past month, and one in nine of those seniors vaped almost daily. The study also found that 20% of sophomores and 9% of 8th graders vaped in the past 30 days.

The director of the National Institute on Drug Abuse, which funded the study, said the findings make it clear the use of e-cigarettes has become a public health crisis. Dr. Nora Volkow said, "These products introduce the highly addictive chemical nicotine to these young people and their developing brains, and I fear we are only beginning to learn the possible health risks and outcomes for youth."

So far, eight deaths have been linked to vaping, and the Centers for Disease Control and Prevention is investigating 530 cases of vaping-related lung illnesses.

The study's researchers say more needs to be done to curb vaping in teens, calling the current efforts made "insufficient."