Teens — And Companies — Are Getting Around The Flavored Vape Ban 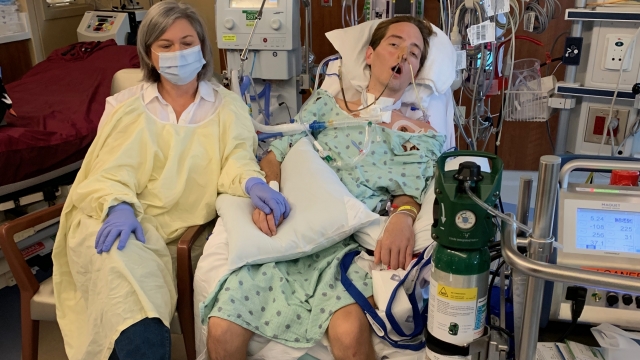 E-cigarettes are still being offered in flavors like pineapple lemonade and blue razz — and that's allowed under the federal ban.

Parents are outraged as the vaping epidemic continues to impact the health of teens and young adults across the U.S.

"I'm standing in front of my child who looks perfect on the outside but is dying," Mcknight said. "As a mother, I was absolutely screaming. 'No, no, no, no, no, this cannot be my son. Are you kidding?' I mean, this is my son. He's dying right in front of me, and I can't do a thing about it. This went on for so long."

Doctors told her the 19-year-old only had a 1% chance of survival after they found a softball-sized pneumonia in his left lung and multiple organ failure. Eventually, doctors determined it was due to vaping.

"It's the most awful feeling, to sit at the bedside of your child and watch him bleed out. Watch him have yet another chest tube placed, watch him vomit because he has massive GI bleeds because of the stress of what's causing all of this.”

Recently passed legislation bans fruit- and dessert-flavored vape products for refillable and cartridge-based devices like Juul. But does not apply to non-refillable, disposable devices — and suppliers have taken notice.

"It's never been more important for parents to understand that this problem hasn't been solved. The federal government has come up with a solution that solves nothing. What it simply has done is created loopholes, in fact, almost a pathway for companies that want to continue to market to kids. So [the ban] created the impression that it got rid of the flavored products that kids were using," said Matthew Myers, president of the Campaign for Tobacco-Free Kids.

Teens and young adults are now gravitating to products like these Puff Bars. They come in flavors like pineapple lemonade, blue razz and O.M.G., or orange-mango-guava. It can last all day, costs less than 10 bucks and is meant to be thrown away.

"This crisis isn't an accident. It happened precisely because the industry designed products with flavors that highly appeal to kids, marketed them with images that made them look cool, and put them in products that are designed to be sleek and modern-looking. This was a product that was perfectly made to attract a new generation. And it's worked," Myers said.

The label on this product shows it contains 5% nicotine. Just looking at this, it doesn't seem like a lot, right? Well, one of these equals an entire pack of cigarettes.

Myers says teens are now suffering from major symptoms of addiction, like shakes and the inability to concentrate — symptoms many users are now bringing attention to on social media platforms like Twitter.

"You can see from these kids, mood swings, and that's the nicotine. Some kids get what they, the kids, call 'nic-sick,' where they're throwing up just from one hit of these things. It's bad stuff. And nicotine has long-term health consequences, heart, lung, brain development, stuff that teenage kids don't need to expose their bodies to," Shellie Bressler of Parents Against Vaping E-Cigarettes said.

McKnight says her son will require kidney transplants and lung surgery and has to avoid going out in public due to a compromised immune system. But she hopes he will be able to continue sharing his story and the risks of vaping with students in his hometown.

“He said, very frank to them: 'You don't want to end up like me. You don't want to walk through having to learn how to walk and talk and breathe, and have trouble breathing the rest of your life and carry oxygen with you everywhere you go.' So I think the reality of seeing someone who is actually young still and harmed forever from these products was huge," McKnight said.