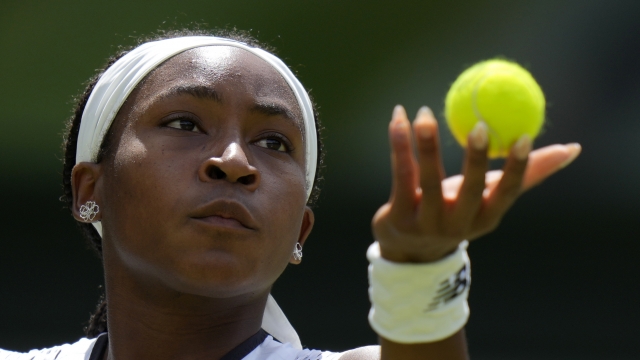 Coco Gauff is the youngest player ranked in the top 100 by the Women's Tennis Association. She's also now ranked No. 11 in the world in singles.

While designer Coco Chanel, blues guitarist Coco Montoya, model Coco Rocha and baseball player Coco Crisp may be the best-known individuals named Coco in their fields, a new Coco has burst on the scene who may become the most famous of them all.

Coco Gauff draws the chants of the crowds from the time-honored lawns of Wimbledon to the heat-baked courts of the Atlanta Open. It was that taste of Southern hospitality that scored the most points during her recent match.

" I got such a warm reception and super happy that it sold out both nights. I definitely felt the love," she said. "I'm just happy that I got to play in this crowd and play a night session."

The 18-year-old tennis sensation is no stranger to Atlanta, having grown up there. But playing at the Atlanta Open was something she never dreamed of as a child.

"Eight-year-old me definitely wouldn't think I would be flying back here as a professional and I guess it's a full-circle moment," Gauff said.

She's the youngest player ranked in the top 100 by the Women's Tennis Association. She's also now ranked No. 11 in the world in singles and is worth a whopping $3.5 million.

Her rise in tennis has been faster than the topspin of a Roger Federer forehand ever since she defeated tennis superstar Venus Williams three years ago at Wimbledon.

Her success on the court has put nearly $5 million in earnings from the WTA tour in her bank account. Those victories and her growing popularity have also secured more than $3 million in endorsements from the likes of sportswear maker New Balance and Italian pasta company Barilla.

"So much of our success is predicated on the players," said Atlanta Open Tournament Director Eddie Gonzalez.

While the teenage sensation's success has helped ticket sales for events like the Atlanta Open, her parents try to remain vigilant and remind themselves she is still young in a world filled with seasoned, battle-tested women.

"Well, I think we try to give her room to express herself and room to take off from tennis and understand her feelings," said Gauff's father, Corey. "Her mom talks a lot, too, about her feelings, how she feels. And, you know, in general, it's good to have balance."

Still, Gauff, like many Black athletes before her, has opted to use her fast-coming fame to be outspoken about social issues — from the overturning of Roe v. Wade to gun violence to the killing of George Floyd. And now, she says she wants to inspire other young people to speak out.

"I think it's very important," Gauff said. "I think the youth is the group that's going to change the world. And I want to encourage all my fellow peers and fellow people my age just to continue to speak out for what they believe in and no matter how young you are, you can make a difference."

It's a lesson her parents instilled in her at a very young age.

"One of the things that we do as a family is to speak your truth," said Gauff's mother, Candi. "And if it's the truth and how you feel, then as long as you have enough information and understand both sides — and if that's what you truly believe, then, I can't hold you back. "

With the Atlanta Open exhibition victory behind her, Coco Gauff now sets her sights on taking a bite of the Apple — the U.S. Open in New York.

And another city known for action – Las Vegas – likes her chances. She is listed as the fourth-best bet to place on the U.S. Open winning singles, and if the fans in Atlanta learned one thing, it is: Don't bet against Coco.

For now,  her road to the U.S. Open continues.