France Reacts In Shock After Teacher Decapitated Outside School 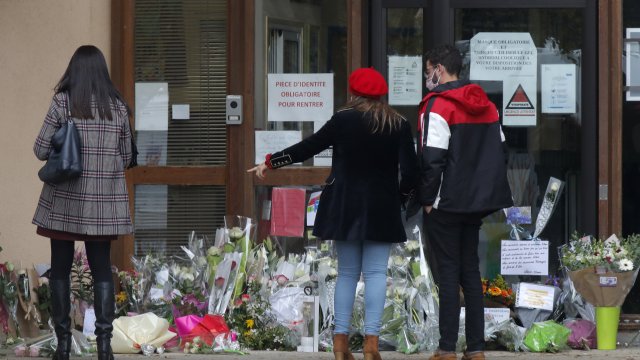 Police investigate the gruesome killing of a French teacher, who received threats after showing an image of the Prophet Muhammad in class.

Mourners placed tributes outside a school near Paris on Saturday, after a teacher was decapitated in a gruesome attack a day earlier.

Police say the teacher, 47-year-old Samuel Paty, discussed caricatures of the Prophet Muhammad during class and received threats days before he was killed. Islam prohibits images of the prophet, expressing concerns it can lead to idol worshipping.

Police shot and killed the 18-year-old Chechen suspect after he failed to respond to police commands. French authorities opened a murder investigation with a "suspected terrorist motive." Nine people, including members of the suspect's family, are in custody.

The attack sent a shock across the country. French President Emmanuel Macron expressed his condolences to Paty's family, adding, “One of our compatriots was murdered today because he taught ... the freedom of expression, the freedom to believe or not believe."

France has now seen two attacks in three weeks related to images of the Prophet Muhammad. Last month, police arrested a man after he attacked two people outside the former offices of the satirical newspaper Charlie Hebdo. The outlet republished caricatures of the prophet  to coincide with the 2015 terror attack on the paper that killed 12 people.

Macron's office said there will be a national ceremony to honor Paty.

Additional reporting from Thomas Adamson from The Associated Press