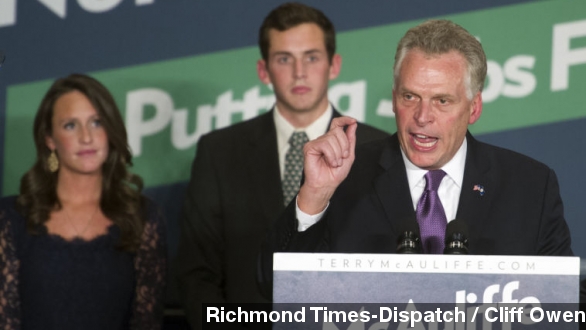 The outcome of Virginia's gubernatorial race wasn't necessarily surprising, but how close it was, was.

"...was never a choice between Democrats and Republicans. It was a choice about whether Virginia would continue the mainstream bipartisan tradition that has served us so well over the last decade." (Via WRIC)

Democrat Terry McAuliffe is the first Virginia governor-elect since 1977 to be the same political party as the president, which might explain in part why it was such a closely watched race nationally. (Via WUSA)

McAuliffe had the high profile support of the likes President Obama and former President Bill Clinton, and he outspent his Republican opponent by $15 million. (Via CBS)

He ran ads like this one trying to paint Cuccinelli as out of touch with women for his opposition to abortion rights.

"Who's Ken Cuccinelli to interfere in the lives of women across Virginia?" (Via YouTube / Terry McAuliffe for Governor)

But even with the efforts, it was definitely a close one. By most precinct reports, Cuccinelli only lost by about 3 percent — 45 percent to McAuliffe's 48 percent.

And in his concession speech, Cuccinelli talked about being outspent almost as a point of pride, stressing how neck and neck the race was and blaming concerns over the president's health care law. (Via WTVR)