Tesla Enters The Battery Business, But The Price Isn't Right 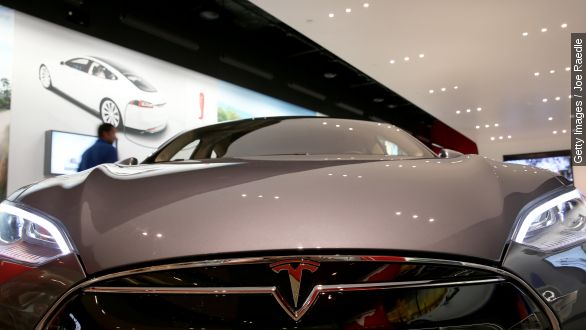 The new batteries from Tesla are already being used by Musk's other company, SolarCity, an energy provider that operates strictly with solar energy.

After teasing its new business venture for a month, the day has finally come for Tesla to unveil its groundbreaking, innovative batteries.

Or at least that's how the electric car company is billing the new home and utility batteries. Tesla CEO Elon Musk issued this cryptic tweet about Tesla's new product Tuesday. That was preceded by a letter to investors where Musk added, "We will explain the advantages of our solutions and why past battery options were not compelling."

The new batteries from Tesla are already being used by Musk's other company, SolarCity, an energy provider that operates strictly with solar energy. The company uses a version of Tesla's new battery as a backup system.

And if rumors are to be believed, Musk already has the Tesla batteries in 11 different Wal-Marts across California and at Apple's Cupertino headquarters.

"This factory is very important to the future of Tesla because without it we can't produce the mass market car," Musk said.

Tesla's new batteries will presumably be produced at the company's gigafactory in Sparks, Nevada, which Musk says will start producing battery cells by 2017 to match the company's projected Tesla auto production of 500,000 cars per year by 2020.

It's too early to tell if Tesla's latest venture into power storage will be a hit or miss, but that hasn't stopped tech writers across the country from debating the matter.

While some have dubbed Tesla's new battery the tech that will transform the electric grid, a writer for Seeking Alpha says the battery is too expensive for many — if not most — companies and consumers.

According to Seeking Alpha, a solar electric bill and the cost to lease the Tesla battery is projected at more than $500 a month compared to an average electric bill that sits closer to $200.

Contributing to that high price point could be the sheer cost of Musk's new-age battery. While installing electrical wiring in a new house can run anywhere from $200 to $2,000, Musk's battery alone is rumored to cost $13,000 bucks, which is even higher than other electricity storage systems.

The one thing that's not up for debate is how the batteries have affected Tesla's stock. Since the rumors of Tesla's battery started buzzing, the electric car company's stock has jumped more than $10.