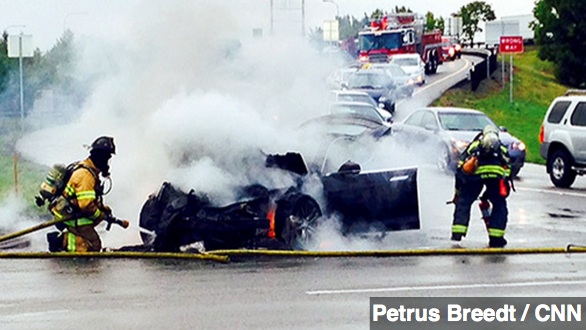 Investigators at the National Highway Transportation Safety Administration say the probe has been prompted by recent "battery fires due to undercarriage strikes with roadway debris" in Washington state and Tennessee. (Via USA Today)

A Model S reportedly caught fire after a collision on November 6th — the third reported incident in less than six weeks. (Via Fox Business)

The New York Times reports: "Two of the fires occurred on American highways when the cars hit debris in the road. A third, in Mexico, took place after a high-speed crash into a wall and a tree. The drivers in all three incidents were unhurt."

The designation of the probe as a formal investigation is significant because it means the federal government could issue a recall, but that's something Tesla CEO Elon Musk says won't happen.

"There is no reason for a recall I believe ... The perception is, if you read the headlines, it sounds like Teslas have a greater propensity to catch fire than other cars. In actuality, nothing could be further from the truth." (Via CNBC)

But Musk also announced through Tesla's blog that the company will be taking three new safety steps because of the fires.

Tesla's shares were down about 4.5 percent Tuesday morning before the markets opened. If investigators find the Model S doesn't not comply with safety standards it can recall the vehicle, but Tesla Motors would still have the possibility of challenging that judgment in court.