With Testing Down And Deaths Up, Fauci Calls Response 'Disparate' 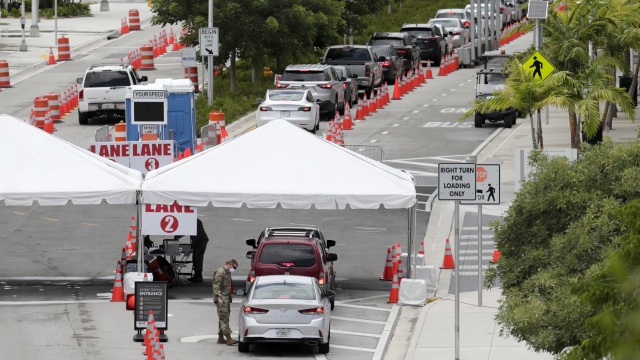 More than 157,000 Americans have died from the coronavirus, and that's going up by more than 1,000 per day. At the same time, an Associated Press analysis shows the rate of testing has dropped.

In recent weeks, President Donald Trump has drawn a line between the rise in infections and an increase in testing, while a number of health experts say he's got it wrong.

On Wednesday, White House Coronavirus Task Force member Dr. Anthony Fauci credited the lack of control over the virus to what he called a "bit of a disparate response" due to the way the U.S. leaves some big implementation decisions to local officials.

"What we've seen is a great disparity in how individual states and cities, etc., responded," Fauci said.

Fauci said the country reopened before getting new coronavirus cases under control. He says he believes the U.S. can do much better but needs a unified response guided by science in order to overcome the virus. He added that mask-wearing should not be a political issue.

Meanwhile, some health experts are calling for tests that yield faster results. That solution would be cheap and simple enough to get millions of Americans tested quickly, but it would come at the cost of higher inaccuracy.

The demand for testing will likely surge this fall, leading to new delays as supplies dwindle with schools reopening and flu season hitting.