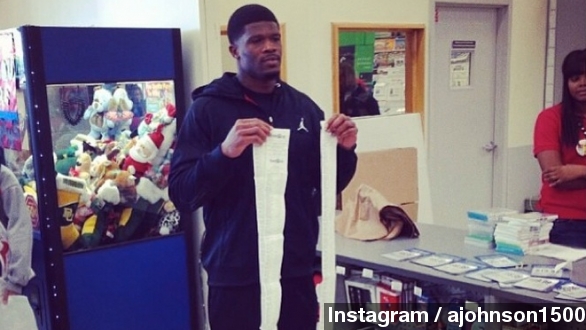 The Houston Texans are on an 11 game losing streak after starting the season ranked No. 7 in the NFL. (Via KRIV)

And after 18 years, the only NFL coach Johnson has ever played for was fired. (Via KPRC)

Yep, Johnson doesn't have much to be happy about in the NFL but that didn't stop him from playing Santa Claus all over Houston.

"Houston Texans all pro receiver Andre Johnson spent $17,000 on toys for a dozen underprivileged kids and their siblings." (Via CNN)

Twelve kids, 80 seconds and one Toys R' Us. Johnson chose kids from child protective services in the Houston area and let them take home everything they could fit in the cart in a little over a minute.

"I think he's awesome for doing this because I like toys and shopping." (Via Houston Texans)

And after spending a cool 17 grand in Toy's R' Us Johnson slid down own more chimney, as a part of the Houston Police Department's Christmas giveaway. (Via ESPN)

"I just remember as a kid not being able, you know, to have certain things I know kids are in tough situations, so I'm in a blessed situation and I'm able to help others." (Via KTRK)

Johnson has been doing the shopping spree program for seven years now but the kids participating might need to run a little faster, last year during this same program Johnson's bill was $19,000.