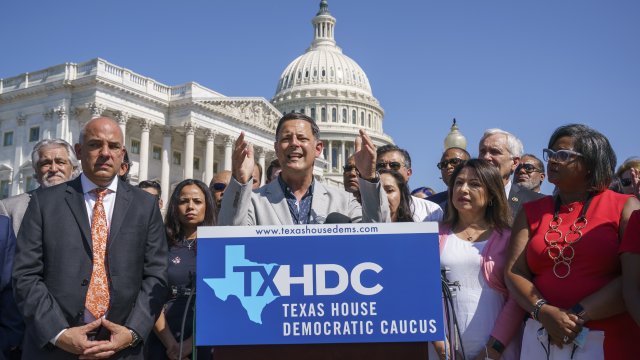 Texas House votes to send law enforcement after state lawmakers who fled to Washington, DC in an effort to block GOP voting restrictions.

The Texas battle over voting rules has gone national, with Republicans voting to send police to track down runaway Democrats.

The fight is only getting started and we want you to be informed not influenced about what's happening.

The elected Democrats bolted for D.C. on Monday. It was their last-ditch effort to block an overhaul to election laws during a special session. With too many members missing, they can't pass new laws. At least for now,  under the state constitution lawmakers can be legally compelled to return.  So House Republicans issued warrants for their arrest.

Dade Phelan, the Texas House Speaker, says: "Members, a sergeant-at-arms and any officer appointed by him are directed to send for all absentees whose attendance is not excused for the purpose of securing and maintaining their attendance under warrant of arrest if necessary."

To be clear the lawmakers aren't fugitives. The "arrests" are to compel their attendance to do their job and Governor Greg Abbott says as soon as Democrats are back on Texas soil, they'll be forced to work inside the Capitol until they "get their job done."

The House bill isn't the only one on the table.  A similar bill is moving forward in the Senate. Republicans say they're securing future elections. Democrats argue it'll make it harder to vote.

Just so we're all on the same page here's what's in them. Both bills outlaw drive-through and 24-hour polling places, ban drop boxes and make it harder to remove partisan poll watchers.

There are two things missing -- the most controversial elements from last time. Republicans dropped a provision that critics said might allow election officials to overturn results if there are voter fraud allegations. They also wanted to restrict voting on Sunday -- that's when Black churches traditionally sponsor "souls-to-the-polls."

The GOP House bill does include two Democratic priorities.  Maybe an attempt to make nice.  The first allows absentee voters to correct or "cure" mistakes.  The other no longer makes it a crime to cast a provisional ballot if you didn't know you were ineligible to vote.