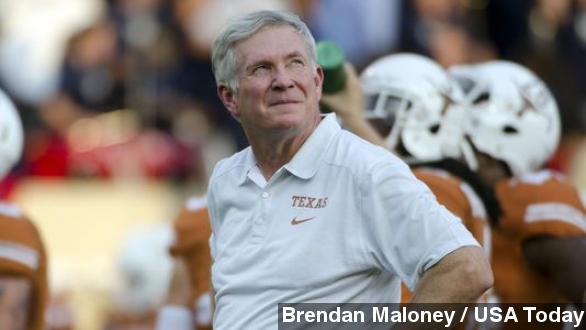 A report from OrangeBloods.com says Mack Brown has stepped down, though Brown told Horns247.com the report is false and he hasn't resigned.

He's the head coach of one of the largest college football programs in the nation — Texas' Mack Brown — and according to one report he's stepping down.

That comes from OrangeBloods.com's Chip Brown — no relation to Mack — who cites several high ranking officials saying the coach will step down after 16 years with the team.

But shortly after the news broke, ESPN reports Texas officials are denying that report and said the university's Board of Regents are meeting Thursday.

There's no question there's an important Board of Regents meeting in Austin, Texas on Thursday at which the future of Texas president Bill Powers will be discussed. ... Bill Powers has long supported Texas coach Mack Brown."

But, if the news is true about Mack Brown's departure, it wouldn't come as a complete shock.

Brown and Texas administrators have faced increased pressure since 2010 for a change in the football program's top ranks. Texas went 5 - 7 and missed a bowl game in 2010, a year after losing in the National Championship game. (Via KXAN) (Via Longhorn Network)

Calls for Brown's departure this season got louder after the team dropped to unranked BYU in its second game of the season and followed that with a loss to Ole Miss.

Then there were the rumors of Alabama head coach Nick Saban being courted by Texas higher ups. Saban has since come out and said he has no plans of leaving the Crimson Tide. (Via WIAT)

Brown's contract runs through 2020 and reportedly features a relatively low-priced $2.75 million buyout if he's let go by 2014. (Via ESPN)

Texas is currently slated to play Oregon in the Valero Alamo Bowl at the end of the month. There's no word yet on whether Mack Brown would coach that game if he does step down beforehand.