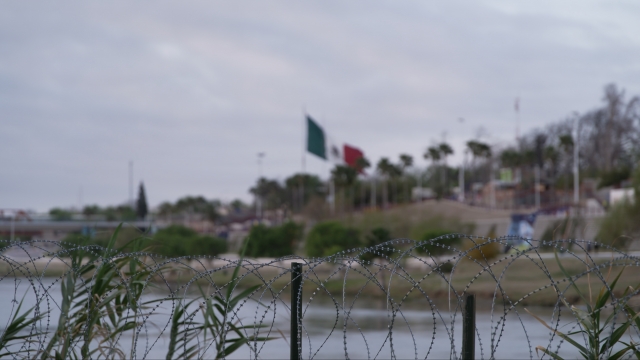 The political blowback against Gov. Abbott's massive border security program is coming from advocacy groups, Democrats and the National Guard itself.

As sure as a sunrise over the Rio Grande, the illegal crossings along Texas' 1,250-mile border with Mexico go up.

Spring is the season when thousands of migrants seek entry into the U.S., not through official ports, but by crossing the river.

Policing the border is primarily a federal responsibility, but increasingly, the state of Texas is stepping into immigration enforcement with a $3 billion — and counting — state effort using the Texas National Guard.

Gov. Greg Abbott says it's because Washington isn't getting the job done.

"As we all know, the Biden administration has completely abdicated its responsibility to secure the border," Gov. Abbott said.

The political blowback against Abbott's massive border security program — dubbed Operation Lonestar — is coming from all the expected places:  advocacy groups and Democrats.

"I understand that it's costing the state taxpayers about $2.5 million a week," State Sen. Juan Hinojosa said.

But it's also coming from within the ranks of the National Guard.

Newsy spoke with a number of actively-deployed Texas National Guard soldiers all serving in Operation Lone Star, all under the condition of anonymity as they fear retaliation for speaking out.

"Then for us to be put down here as political pawns for an agenda by the governor, it's unfortunate," Soldier A said. "It's disgraceful what they're doing to the service members."

According to Texas military law, soldiers who speak their minds can be prosecuted: If any use "contemptuous words against a governor," they "shall be punished as a court-martial directs."

NEWSY'S JOHN MONE: Can you just describe how much trouble you get in if I put your face on camera?

SOLDIER B: Essentially, my career would be over.

The biggest portion — almost $1.4 billion — goes to the governor's office alone for state-sponsored border wall and prosecutions of migrant trespassing on private property.

The state's Department of Public Safety gets $942 million for expanded trooper missions. And the Texas Military Department that oversees the National Guard got more than $411 million.

That's paid for the deployment of 10,000 Texas National Guard from El Paso to Brownsville.

"It didn't seem like it was very well planned, which it was not. And there are still questions about how effective again, with the job that we're doing and how effective it is for us to be down here," Soldier A said.

Newsy heard the same kinds of complaints from everyone we spoke to. They all mobilized on short notice for a mission they thought would be short-term. But that mission has dragged on far beyond what they expected.

In Soldier A's case, it's been six months, with six months still to go.

That matters because the federal government is not helping pay for Operation Lone Star.

"You don't get any retirement points for a pension, like if you choose to go career and then retire. Like none of this goes towards that at all," Soldier B said.

He says he's just as upset as these service members and blames the governor and politics.

"You know, I think that this is definitely a $3 billion campaign ad," Featherston said.

In 2021, The Army Times reported four soldiers took their lives by suicide. After the Texas Military Department refused some their hardship leave requests, some faced financial and family pressures or missed job opportunities.

Featherston says those suicides moved him to speak.

"Whenever you're not focused on the soldier, bad things happen," he said. "You just add another level of stress."

Along with the economic hardship, the soldiers Newsy spoke to just don't see the point of the mission.

As described by the soldiers themselves — and outlined at a Texas State Senate Committee hearing on border security — the powers of the deployed guard are limited.

They can't detain migrants or arrest them because that's the jurisdiction of U.S. Border Patrol.

And unless state troopers are with the guard on private ranches to round up migrants for trespassing, they are empowered to do little more than observe, report or engage in construction work.

SOLDIER A: It's a lot of time, either at a hotel or sitting at a point on somewhere on the border, watching for the possibility of someone crossing the border.

MONE: And in your time, wherever you're posted, what have you seen?

SOLDIER A: I have seen apprehensions from Border Patrol. I have not been involved in any apprehensions myself. And I would say that that would be true for most of the guardsmen that are down here.

The governor's office declined Newsy's request for a direct on camera interview about Operation Lone Star.

So we caught up with him at an event in the Rio Grande Valley.

MONE: I've spoken with dozens of actively deployed service members who feel that their presence down here across the border is nothing more than a show. Do you think that's a good use of taxpayer dollars?

GOV. GREG ABBOTT: You may visit with dozens of people. I have been on the border with our National Guard multiple times, and I've visited with hundreds, if not thousands of them. And they tell me, 'Sir, we appreciate your leadership and leading the National Guard.'

But the soldiers Newsy spoke to didn't appreciate it at all.

SOLDIER B: This whole deployment is pretty much pointless and we're just here, pretty much, just for Abbott to get his numbers in for election.

The mission is under new command — the new adjutant general has pledged to fix problems with pay, living quarters, equipment and most of all — morale.

MONE: Is there a universal opinion about the efficacy of your time down here?

SOLDIER B: It's a it's a waste of time for us to be down here, especially when we were pulled for from civilian jobs.

Despite the concerns of guard members, Operation Lone Star and its costs aren't ending anytime soon.

The Texas Military Department just got an additional $465 million, all re-allocated from other Texas state agencies to continue at its current pace, at least until this fall.